Lee and I went away at the end of September for a week. We had been thinking about it for ages as lockdown restrictions were easing; we often go away at the end of September/beginning of October as there's no kids around which is great for us. We really wanted a pool because as I've said we really miss swimming, so we looked on all the booking sites filtering for places that had a pool. We weren't bothered where in the UK we went as long as it had a pool and that pool wasn't shared between many people, as that didn't seem very safe. We saw this cottage in Warwickshire, located between Warwick and Stratford, and it seemed perfect. There are two cottages on the site, and the owners' house, so the pool wouldn't be shared between many people at all. So we booked it and then set off on the last Saturday in September. We've never been to Warwickshire so that was exciting, especially as it meant we could go to Stratford upon Avon.

We put the kittens into the cattery as we couldn't find anyone to look after them. But, it was nice enough and the owner played with them quite a bit and said they were fine, so we would do it again. We couldn't get into the cottage until 3pm so we didn't set off until a bit later in the day. We also did what we've done on a few previous holidays and bought a big chocolate cake from a bakery in our village to take with us for pudding each day. We had already planned our meals and had shopping delivered, which was perfect.

We got to the cottage, near Rowington, around 3pm. We got in and unpacked a little bit and then decided to go swimming straight away. The pool was absolutely gorgeous! It was in a building that had been a barn. You went in and up some stairs and there was a tiny gym area, then down a couple of steps to the pool. It was long enough to swim in, and at the deep end it was about two metres deep. It also had a bunch of rubber rings and toys, which was nice. We could use it whenever we wanted and as I said, we thought we might have to share it. But there was no one in the other cottage to ours, and we heard the owners in the pool on the Saturday evening but otherwise I don't think they used it at all. So we had it to ourselves and it was safe to use as there was no one else around!

I had, hoping that we wouldn't have to share the pool, taken a bikini along with me to wear. This purple bikini top is underwired like a bra, but also really comfortable. It has a snap back and I love it. I wore it with bikini bottoms with watermelons on! It was so nice to wear the whole ensemble.

We had bits for tea in the evening and then the cake. It was gorgeous - four layers with white icing and chocolate ganache in the middle. We thoroughly enjoyed it. We watched a film and basically relaxed. 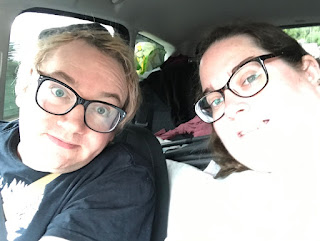 On our way to Warwickshire! 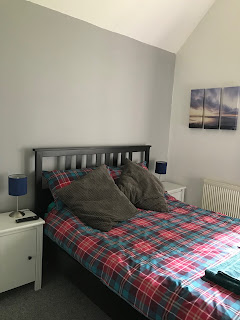 The bedroom in the cottage. The bathroom was en suite and had a barn door which was the most annoying thing ever 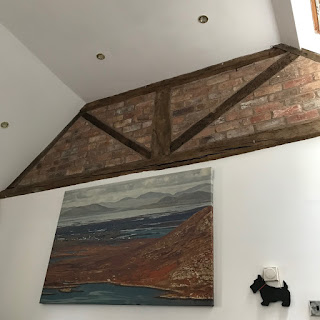 The beams in the living room, the cottage had obviously previously been a barn 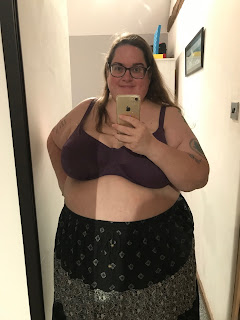 Bikini! I think this top is a Flirtelle one, I've had it years but don't get to wear it often 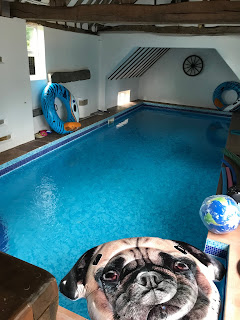 The pool! The cottage bedroom wall attached to the end wall here 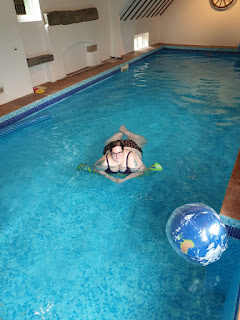 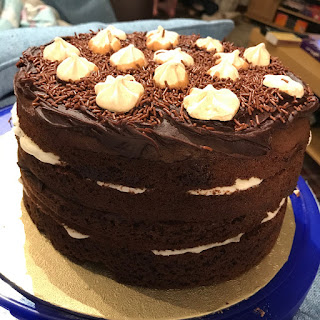 The cake! I feel like this photo does not give you the size of it 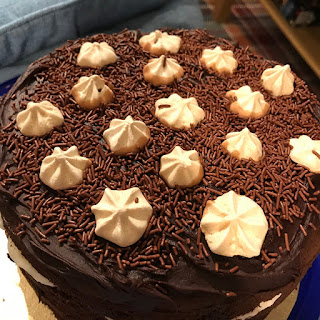 There were tny meringues on top 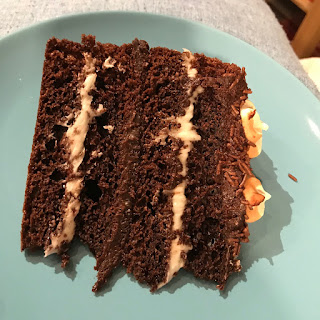 And a slice cut to show you the layers
Posted by Rebecca at Friday, October 30, 2020