When we got back off our holiday my new glasses had arrived in the post. I had been into Barnsley a couple of weeks previously to get tested. It was a bit of a nightmare actually because I had to go by myself, of course, and I really struggle getting tested anyway. Then, because I'm so shortsighted (I'm around -10 in both eyes) the optician couldn't get a decent look at the back of my eyes, so he dilated my pupils in order to see them better. Fortunately Lee had driven me into town and although I'd said I would get a bus home, once I knew my pupils had to be dilated I asked him to wait for me and fortunately he was able to.

I found the sensation really weird and felt disorientated and dizzy for the rest of the day. I had planned to do work at home but couldn't see the computer well enough to do that, so I couldn't. But my eyes looked healthy so that was good, and the main thing.

I tried on a few frames. Because of Covid, you then had to put the ones you'd touched into a box so they could be sanitised before going back on the shelf. So I didn't want to try on loads. I needed a pair of ordinary glasses and a pair of sunglasses. I chose two frames and spoke to the sales assistant. I pay for the lenses thinning on my ordinary glasses, but I'm not bothered about my sunglasses. That did mean that the lenses would be about a centimetre thick in my sunglasses, but I decided that was fine. In all, my glasses cost just under £200. And that's including a little bit of help from the government! It really annoys me because I don't CHOOSE to have such bad eyesight, and if I didn't have glasses I wouldn't be able to live an independent life. We were able to use some of my self-employment grant to pay for my glasses, thankfully.

Anyway, also because of Covid, you don't go and pick up your glasses but they post them to you. You can still go in if they need adjusting but of course it does cut down on the number of people in the shop. My ordinary glasses haven't needed adjusting so that's good.

So my ordinary ones are Converse ones, not that I was bothered about the brand, I just liked the blue colour on the front of the frames. The sides are leopard print, which I also like. My sunglasses are a nice blue colour, but unfortunately one of the lenses had been chipped in transit. I rang Specsavers and they immediately ordered some more for me, which came direct to me and arrived about a fortnight later. They're okay - I don't love them but I won't be wearing them loads over the next few months, so I'll put up with them for a while and see when we can afford some more for me.

It took me ages to get used to my new glasses and my eyes kept going in and out of focus, but they seem to be okay now. 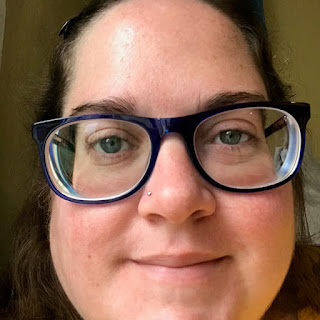 New glasses! I love the blue, and there's a bit of turquoise too 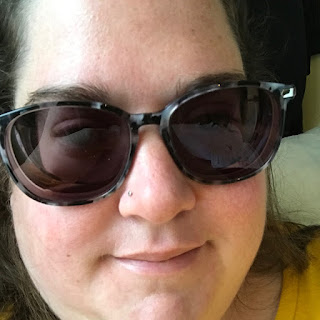 New sunglasses, they're sort of a grey and blue mottled effect 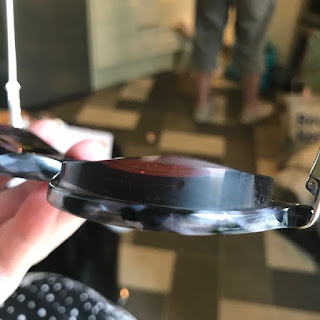 Look how thick the lenses are though. Ridiculous. They're seriously about a centimetre thick 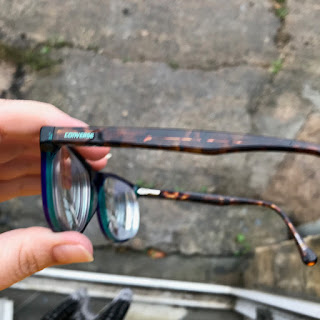 The leopard print sides of my ordinary glasses 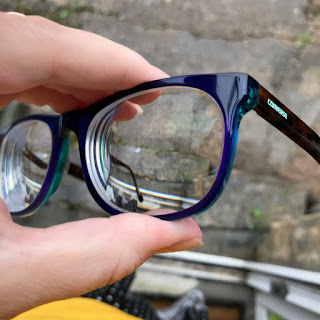 And a closer look at the blue - they're nice aren't they
Posted by Rebecca at Monday, November 30, 2020