Trip to Manchester in mid July

I went to Manchester in mid July to meet up with my friend Amy. She had a baby, Robyn, in February and obviously thanks to lockdown I haven't been able to meet the baby yet so we made plans to meet up when we could. I suggested meeting at the Drop Bar Cafe in Chorlton. We've been before, two and a bit years ago when Amy's first baby Daisy was very little. I had it in my head that it was completely vegetarian, but I was wrong. It does serve meat, but it has good veggie and vegan options. It's Jamaican, so everything is nice and spicy!

Amy mentioned to me that Lily's, a vegetarian Indian restaurant in Ashton-under-Lyne that we've been to a couple of times, now has a deli in Chorlton, so I decided to go early to Manchester to go to it and to the Unicorn grocery, which is just near the deli. I've been there before with Amy. I had a gorgeous drive across the moors in the sunshine and arrived at the Unicorn around about 11.15. They're extending it so the car park isn't huge, but I managed to get parked. I bought lots of snacks like Bombay mix, and some sourdough bread for Lee, and some coleslaw and onion bhajis for both of us. In Lily's I bought samosas and a portion of dhal and stuff. It was so hot so I also got a cold can of lychee Rubicon out of the fridge!

I drove along to the Drop Bar Cafe and parked nearby at just after 12. I went in and got our table, even though I was a bit early. I ordered a pineapple juice and read my book while I waited for Amy.

She and Robyn turned up not too long later, Robyn dressed in just her dungarees which I was very jealous about because it was warm! Amy ordered the vegan drop box and I ordered the veggie hence drop box, I'm pretty sure this is exactly what we each had last time!

Mine was so good, it has jerk halloumi, veg curry, fried plaintain, two types of coleslaw, rice and peas, and a fried dumpling. It was all so nice, absolutely amazing flavours and really delicious. I'd recommend the place if you're in the area and you like Jamaican food!

I had been sitting in the same place for quite a while by the time we left, and as I stood up I realised that the front part of my leg was numb down my shin. I'm pretty sure this is still a by effect of my surgery and the fact that the spinal block didn't wear off properly. I'm finding this happens sometimes, and if I get pins and needles in my leg it physically hurts, like I'm being pricked with actual needles, for ages as it wears off. I've mentioned it to my consultant and he said it was just an after effect and I shouldn't worry. The numbness did wear off, but it took over a day to do it. Sigh! 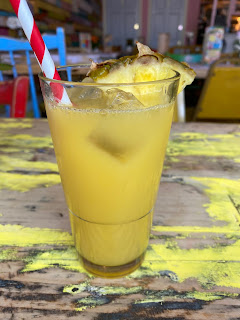 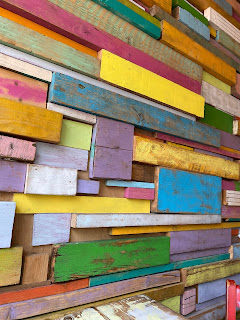 The wall in Drop Bar Cafe, so colourful! 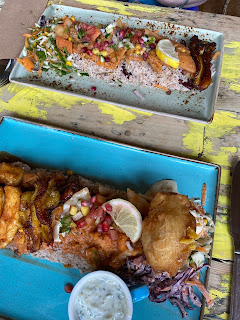 Mine and Amy's lunch 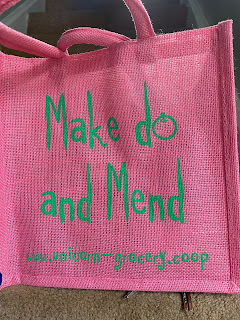 And the cute just bag I bought in Unicorn!
Posted by Rebecca at Saturday, August 21, 2021