Trip to The Bookish Type in Leeds

At the end of June I went to Leeds to meet my friend Leanne and to visit The Bookish Type, which is an independent queer bookshop in Leeds. I can't remember where I first heard of it, but I've been wanting to go, so I said that on Twitter and Leanne replied saying she'd love to go. I haven't seen Leanne or her partner and child since Christmas 2019, so it was well overdue and I was really looking forward to it. I went into Leeds a bit early and ate some lunch by myself in Costa, having parked in the Merrion Centre, before I went upstairs to meet Leanne. The shop isn't huge, but it does have soooo many books. They're all nicely categorised, too. First on the left was children's and middle grade, so I spent some time looking at that. I was pleased to see the Murder Most Unladylike series on the shelves!

I was thrilled to see so many books that I've already read, and books by friends of mine. It was so lovely! I picked up three books and some badges.
The YA section was big - two shelves - and I asked the person behind the counter if I could take some photos of it. I always do this in bookshops as I don't want to annoy anyone, and I also don't want them to think that I'm taking photos of books I want so that I can buy them online later as I think that's rude IF you have the money to buy in store. The person said yes and I said I was a YA blogger and was really impressed by their selection. There were books about teens of all races, with other intersections like disability, and not just contemporary YA but fantasy and so on too. The person thanked me for the compliments and said they didn't always know what to buy, but tried to focus on British YA and not have solely American YA.
Leanne bought a book for her little girl and then three books for herself. We went for coffee afterwards and spent quite a while catching up. I set off home around 4.10 and didn't get home until 4.50 - I've forgotten what being in queuing traffic is like! I used to work in Leeds and I honestly don't know how I did it!
Here's the YA shelves what I got: 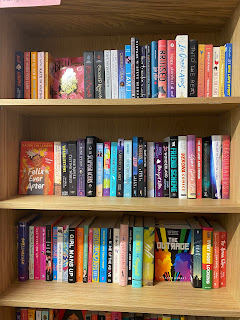 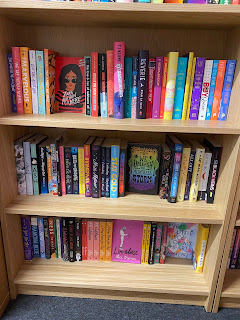 Look how vibrant and colourful they are - absolutely gorgeous. The person behind the counter and I had a discussion about how queer YA has come on so far since we were teens. This is one of the reasons I love it so much! It just didn't exist 20 years ago when I was a teenager! 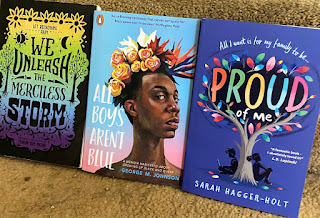 The book on the left is a sequel and I read the first one ages ago and have been meaning to buy this one. The other two just looked good 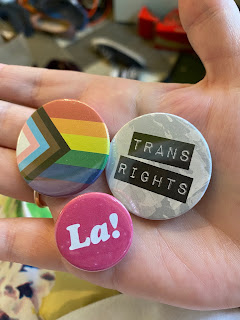 La! If you've seen It's A Sin, you'll know why this has become popular. I have a t-shirt too. The others are inclusive badges and I am an inclusive queer. Thanks!
Posted by Rebecca at Wednesday, August 04, 2021