Weekend in Bradford - Part I

My best friends Sam and Jacqui and I had a weekend trip in Bradford last month. Jacqui bought Sam and I tickets to the Rocky Horror Show for Christmas and we decided to make a weekend of it and play tourist in a city that none of us live in. We booked two nights in the Midland Hotel which turned out to be really lovely. We had a triple room, it had two double beds and a put up bed, and still had plenty of space, and the bathroom was huge and had a bath and a separate shower. It also had parking which was good as I drove there.

We went to the matinee of Rocky which started at five, so we got a taxi to the theatre and had a drink first. I know Rocky isn't perfect and a lot of people dislike it for extremely valid reasons, but I have loved it since I was fourteen and do still like to see it live every few years or so. I first saw it at Bradford Alhambra so it's always nice to see it there again. Charlie Condou (best known as Marcus on Coronation Street) was playing the Narrator and he was great.

They were having some sound problems and had to have a few minutes break to sort it out, but otherwise it was fun as always.

After the show we went round the corner from the theatre to Omar Khan's which is a really nice Indian restaurant. I had onion bhajis and a yummy paneer, tomato, and cream dish which was surprisingly spicy. Then we went back to the hotel and relaxed in our pyjamas, drinking wine and eating cupcakes! 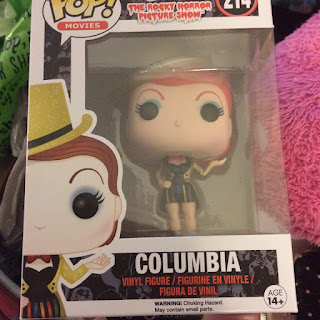 Sam bought Jac and I a Pop! each. Jac's is Frank'n'Furter and mine is Columbia - I love her! 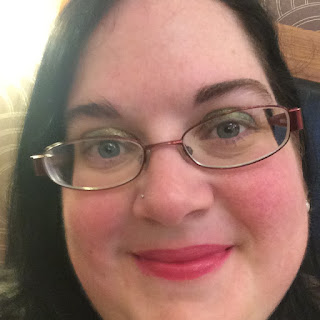 I forgot to bring make up with me so I borrowed from Sam and Jac, I was looking okay 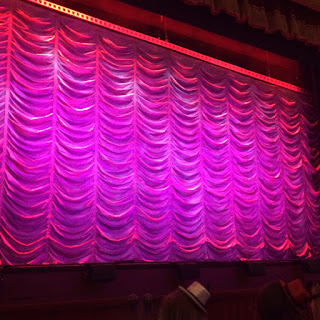 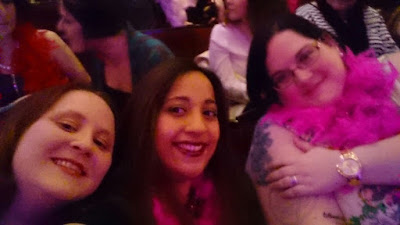 Jacqui and Sam and me at the show, this is Sam's photo 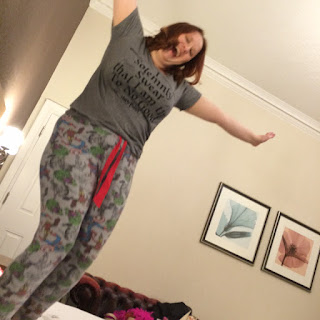 Jac fulfilled a lifelong dream of bouncing on a bed, haha. She's too cute!

And that was Friday!