I think I've said before how we only got our garden finished last year despite the fact that we've lived in this house since 2004. The wall at the front was unsafe but once that was made right we had grass put down and we spent a lot of time out there with Ivy. I like the grass but wanted some plants too, so earlier this year I bought these planters from Argos.

April 9th was the ninth anniversary of my dad's death. In one way, it feels like forever ago, and in another it feels like just yesterday. I still miss him so much. I knew Lee was worried about me, so we decided to take it easy for the day. My car needed hoovering and washing so we went to the garage to do that, then we went down to the Range to buy garden stuff.

I bloody love the Range, it's full of crap that you never knew you needed. Their craft section is fabulous and much cheaper than Hobbycraft. Their home range is really funky and a lot of our cushions and things come from there. I'd really recommend going if you've never been. Their garden stuff is cheap too, so I knew they'd have the things I wanted.

We bought stones to put in the bottom of the planters to provide drainage and to weigh the planters down. We bought compost and some plants. I like the ivy style plant, for Ivy, obviously, and the bright yellow colours on the primula. The lavender smells lovely and I'm hoping the bush will be huge eventually.

We had lunch in Taco Bell which is one of my favourites, I know it's a bit rubbish but it's delicious. Lee really likes the Volcano Burrito which is indeed very spicy. They have a big vegetarian selection and I think most things can be made vegan without cheese or sour cream in them. I've no idea why we've one in Barnsley but I like it!

When we got back, the sun was shining so brightly so we went outside with Ivy and planted everything up. It felt really good to be doing something useful. I like plants but I'm never very good at keeping them alive. Hopefully this time though! 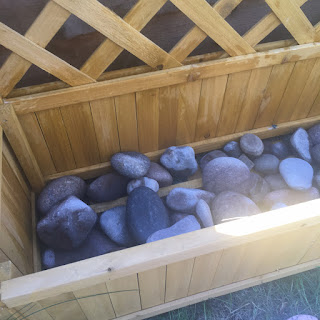 The stones that went in the bottom. I kept a few out of each that were nice to decorate the soil with. 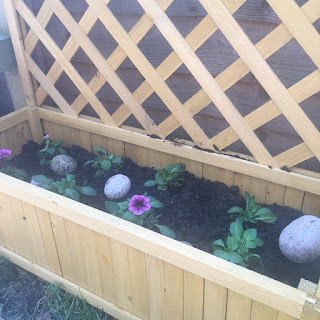 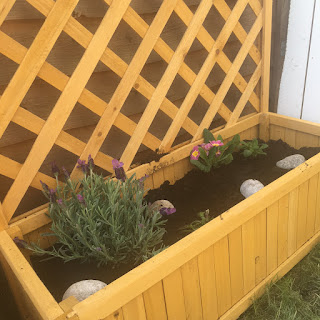 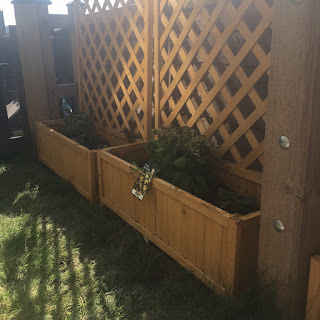 The edge posts you can see are the fence, it's a bit complicated how it had to go, which is why I wanted to fill in the gaps with planters 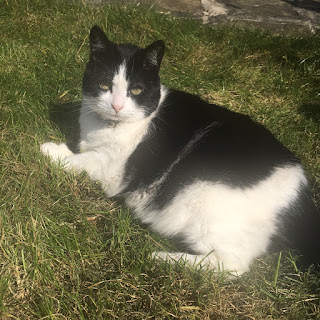 And of course I had a little bit of help from Ivy.

Email ThisBlogThis!Share to TwitterShare to FacebookShare to Pinterest
Labels: day out, garden