What I Did 29th April

Now, truth be told, I wasn't feeling very well in April. Usually if I feel bad it's because I'm very anxious about something. I've had anxiety since I was very little, and when I was at 6th form I had some counselling for the first time where the counsellor said she thought I had anxiety which then led to depression, rather than depression itself. I've been treated for this ever since I was 14, on and off. I'm sometimes better and I'm sometimes worse. I had a year of counselling which ended in September 2016, and my anxiety has been mostly okay for ages.

But then, April. It was the 9th anniverdary of my dad's death which seemed to hit me really hard, and I just couldn't climb out of it. I was really, utterly sad. I was managing to keep a bright face on things, because I'm very good at masking things. But underneath, I was quiet and sad and Lee was worried about me.

On the 29th of April he had a gig in Scunthorpe and before that he was going to record with his new band, so he'd be gone most of the day. I was dreading being left by myself. I'm used to being alone but for once I was feeling lonely. I tried to make arrangements with people but everyone was busy. I thought about going to the cinema and decided I'd head to Wakefield to get a few bits I needed.

It turned out Lee had time to get lunch with me, so we went to the pub just up the street from us which does really good chips. I had a burger and he had a chicken burger and then I went off to Wakefield and he went off to Sheffield.

I called in on my grandma to see if she wanted to come out with me. She didn't - she was tired - but I talked to her for a bit anyway. She gave me some bluebells from her garden which I put into a little vase when I got home. I went to Sainsbury's first, and treated myself to some new jewellery and a new handbag while I was there. I was cross because I couldn't buy my mum's birthday present there, which was annoying. I went to Halford's to get a new brake light and to get them to fit it - something which I'm really glad they do as Lee and I are pretty rubbish at cars!

While I was there I was checking Instagram and my friend Holly had been to Starbucks which reminded me I could stop at the one near my mum's house on the way home. I went to Office World or whatever it's called to get stuff Sainsbury's didn't have, and went to Argos for my mum's birthday present. Then I set off home and went through the Starbucks drive thru which is much less anxiety inducing for me. I got an iced drink and a hot latte, and a muffin. Near my house I stopped at the shop to buy some stuff for tea for me and some alcohol.

When I got home I sorted out the washing, took the cat outside in the garden for a bit, fed her, and then got into my pyjamas. I came upstairs to my attic room and emailed with my BFF while we watched a TV show at the same time. It's one of my favourite ways to spend time with someone while not actually being in the same place as them! By this time I was feeling okay. I felt like I'd achieved a lot and was happy to be by myself again.

I'd bought passionfruit and apple Old Mout Cider which I'd never had before, but I really liked it! I'm looking forward to trying their other flavours. I went to bed around 11 whihc Ivy was happy about, and then Lee got home around midnight.

I was very gentle with myself and practiced some self care (like the pyjamas) while also treating myself (Starbucks/cider/whatever else). These are the best ways I know of dealing with depression. I know I will be okay, in time. I know too that days like this really help. 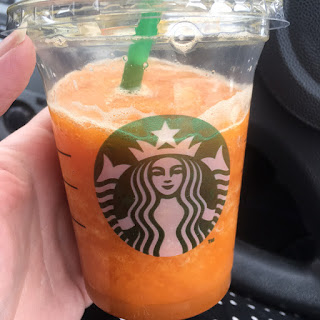 Mango and passonfruit iced thingummy. It was delicious and really refreshing. 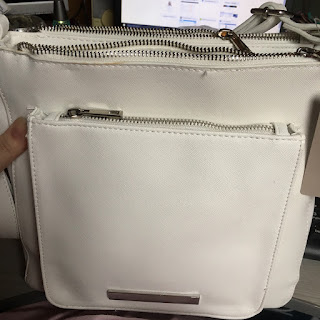 New handbag. It was just £14! I thought it would be ideal for my holiday because it is very roomy and has zip closures. 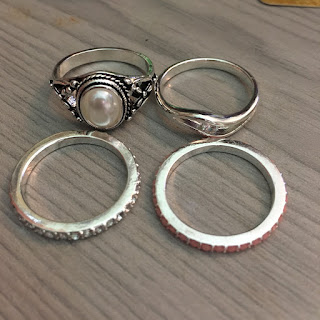 The rings I bought. I was impressed with Sainsbury's jewellery actually 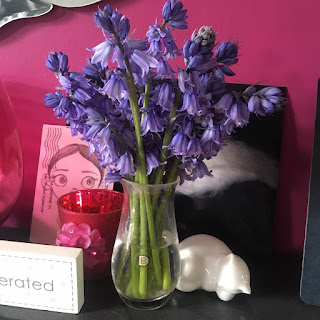 The bluebells my grandma gave me :)