Day 4 of our week off was Lee's birthday. I can't believe he is 37 - when I met him he was just about to turn eighteen! We had to leave Cumbria, so I had booked us into Lancaster House Hotel for the night.

We have been to this hotel before. The Christmas after my dad had died, me, my mum and Lee went away because it was better than being at home. We had a nice time - the hotel was really luxurious, the food was amazing, and we made good use of the leisure facilities. But we were all grieving horribly and Lee had a terrible cold, so I've always wanted to go back and make better memories. I was looking for somewhere between Cumbria and home just for the night, and this popped up at a not ridiculous price, so I booked a double room.

We left Cumbria around 10am and arrived in Lancaster about about midday. I had booked afternoon tea for lunch for us as a surprise for Lee at 1pm, so we were slightly early. It didn't matter though because our room was ready - and we had been upgraded to a suite! It was on one corner of the ground floor, and it was huge. Lee and I stayed in one back in 2008, and I was so glad to get one again. It had a little sitting room area, a huge bedroom and bed, and a huge bathroom. It was so lovely.

We sat there for a bit and Lee opened his birthday presents. I had bought him some vinyl, some secondhand Vans trainers, and some chocolates. The hotel was most of his present really. We went into the bar for lunch; the afternoon tea was really nice. There was a good selection of vegetarian sandwiches, really fluffy scones with a TON of clotted cream, and a lovely selection of little cakes. We struggled to eat it all; I took the macarons away with me.

After lunch we went to the swimming pool. I remembered it from when we visited before, there was an outdoor hot tub and we went in it on Christmas Eve and Boxing Day and we could see snow on the tops of the mountains nearby which was surreal. There's a nice pool and an indoor hot tub which was almost too hot to sit in, and the outdoor hot tub was still there. We sat for ages outside and it was lovely, it was so relaxing! It was around 5pm by the time we eventually got out.

Back in our suite, I ran a hot bath and wallowed there for a bit, I rarely have baths but love to on holiday. Lee got in after me and we both watched the TV that was between the bedroom and bathroom.

There is a restaurant in the hotel, but it didn't have a lot of vegetarian choices and was quite pricey, so I'd done some prior research and chosen the Mariners in Lancaster to eat. It is a nice pub - lots of real ales apparently - and the food was amazing. I had avocado hummus and then battered halloumi and chips. We were both too full for pudding so we went back to the hotel and had a drink in the bar.

Despite the luxurious surroundings I didn't sleep too well, not at all the fault of the hotel but I woke up tired. We had booked breakfast and it was really good - they had a bunch of veggie stuff they could cook to order, and the decaf coffee was really nice.

We checked out and then drove home. We had decided to come home for one night to see the cat and to unpack and repack before camping, and it was so nice to sleep in my own bed! 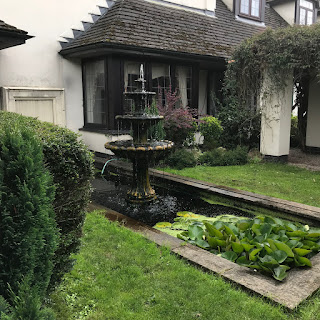 Fountain in front of the hotel 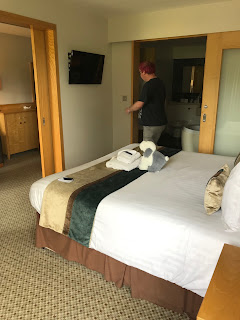 The bedroom of our suite 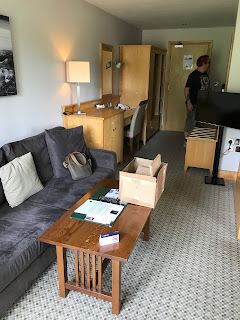 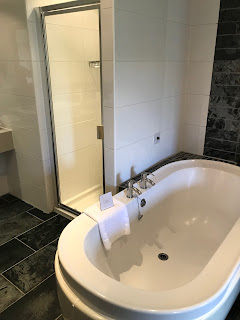 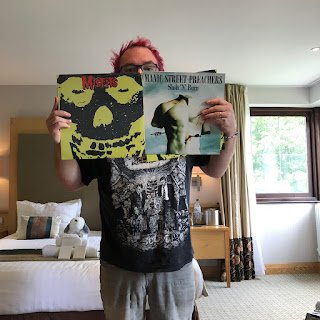 Lee with his Misfits and Manic Street Preachers vinyl (I bought the Misfits online but the Manics was from a shop in Wakefield for £5!) 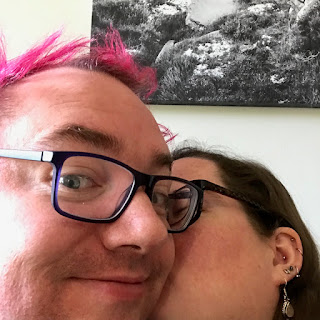 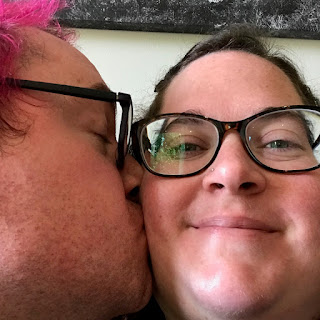 And a kiss for me 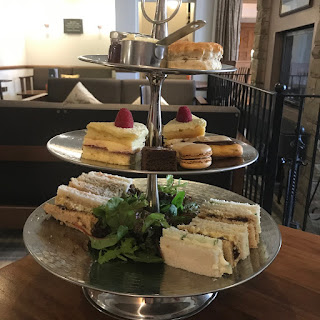 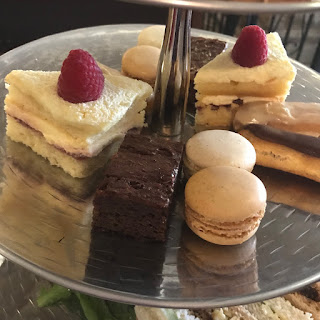 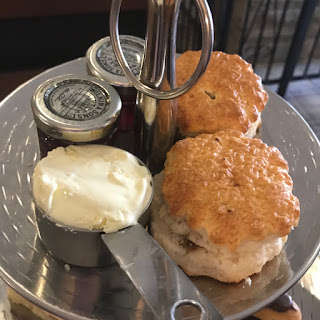 Look at all the cream! Ridiculous 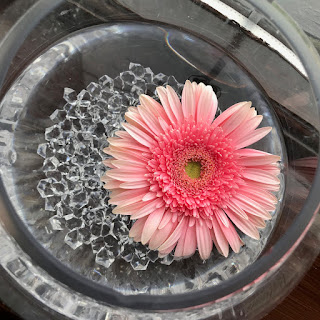 There was fresh flowers all over the hotel which I really liked. These were dotted along the hallway 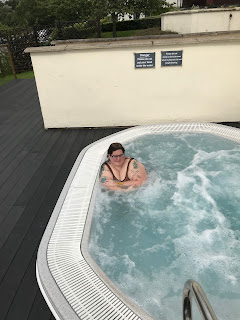 In the outdoor hot tub. It wasn't too sunny but it was lovely 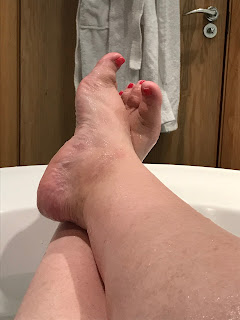 Wallowing in the bath 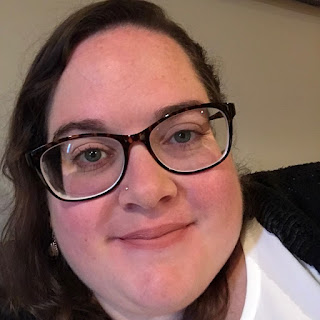 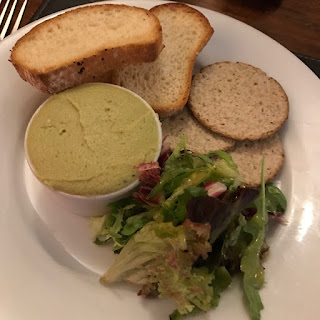 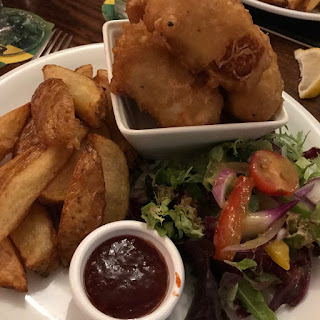 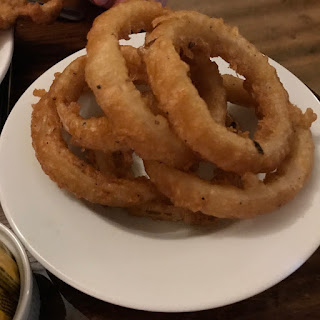 And we shared a portion of onion rings 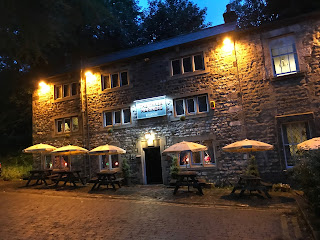 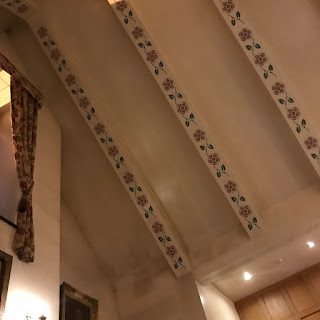 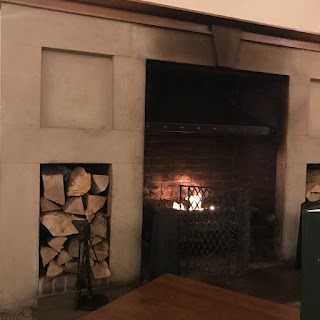 There was a lovely roaring fire, too - when we went at Christmas these were so cosy! 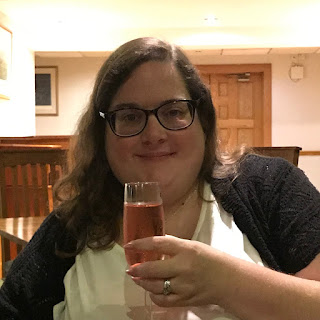 Having a drink in the bar. I'd had my hair cut about a week before this picture, I'd just had a trim and a lot of dead ends cut off but it was looking a lot better!

Posted by Rebecca at Wednesday, September 25, 2019