What I Wore 16th August

Lee and I were technically on holiday starting from this Friday. Lee had the following week off work and we had considered going away from the Friday, but we had camping with my family the following weekend and couldn't afford more than a few days. Then Lee was offered a gig on the Friday, so we decided we'd stay at home until the Sunday and that I'd go with him to the gig. So it felt like being on holiday but wasn't!

Anyway, the gig. A friend of Lee's used to be in a band called Irrational Act - Lee is close friends with two of the other ex members - and he was coming back from where he lives in Japan for a couple of weeks, so Jez (another of Irrational Act) threw a gig to celebrate. Lee's band This Is Not A Drill ended up headlining which was nice for them.

It was raining as we set off so I had pulled out my rainbow umbrella and made Lee take a couple of photos of me. I was wearing this mustard top from Yours clothing, I find it really comfortable but it's gone bobbly quite quickly. I also wore this skirt - I'm sure I've said before but this used to be a dress. The top had gone bobbly so I cut it off as there's nothing wrong with the bottom bit. I'm really enjoying mixing it up with different tops!

We drove to Sheffield, picked up Lee's drummer Jake, then went to the venue. Lee was helping do the sound for Jez, so I read my book while he did that. Then we went across the road for chips in the takeaway there. I sat in the other room while the first bands were on, doing my cross stitch. I was fine! I went into the main room to watch Lee's band and really enjoyed their set. They got the three members of Irrational Act in attendance to do their song Community, which Lee's band has covered on their new album. It was a really joyful gig, full of pure friendship and laughter! I enjoyed myself. 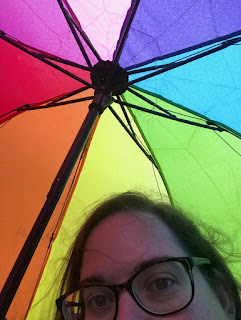 My umbrella was just from eBay a few years ago, it was less than a tenner 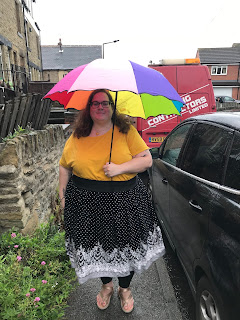 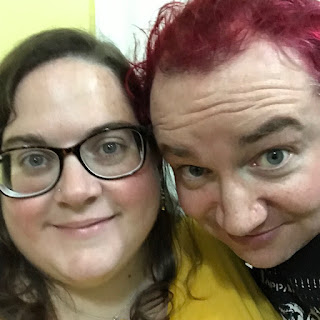 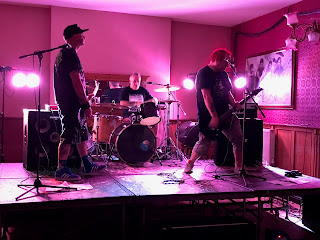 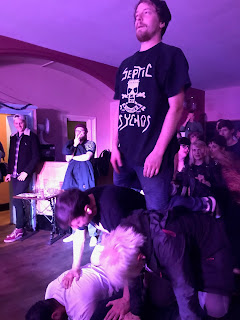 A human pyramid was formed 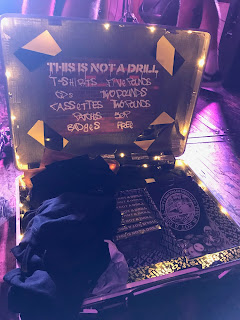 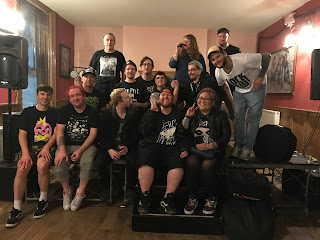 And finally here's everyone who was involved in the gig!

Email ThisBlogThis!Share to TwitterShare to FacebookShare to Pinterest
Labels: scarlett and jo, yours, yours clothing