It was Lee's 38th birthday in August. When he and I first got together, he was about to celebrate his 18th birthday. His mam bought him a huge chocolate fudge cake and he ate three quarters of it, I swear. We've had loads of nice times on his birthday since. We often go away but we decided not to this year as we were going away the week after (which I'll blog, obviously!). Lee only told me a few things to buy so I bought him those and then some aftershave and some chocolate too, which he always likes. The aftershave is Davidoff Cool Water, which I LOVE on him.

Lee decided he would like to go swimming. We had been looking at going to Hathersage lido, but their swimming times go for sale at 6am each morning and are always sold out by the time I get to look! So we decided we would go to Barnsley Metrodome. It's a big leisure pool and when we looked, you had to book an arrival time and then you got 90 minutes to swim, which seemed fine to us. So we booked for 10am, meaning we basically just got up, fed the cats, and went into town. You were supposed to arrive "beach ready" meaning with your costume on, so we just stripped and got into the pool.

It wasn't too busy and it was SO LOVELY to be in a swimming pool. We hadn't been since the end of February and MISS swimming so much. We usually go to the gym at least once a week and usually book holidays with pools, so we've really missed it. It was so lovely to launch myself into water. There's a big leisure pool with a wave machine so we got to play in the waves a few times, and there's a lane pool, so we went in there to swim down to the deep end a couple of times. They're connected with a shallow area that has bubble jets in it, so we sat there for a bit too. It was SO much fun. But I knew that my body would really hurt afterwards and indeed it did.

We got into the car still wet, sitting on towels and plastic bags to stop the car from getting wet. We went home, where the cats wanted to eat us (what is it about chlorine), had showers, and headed back out again to the White Rose Centre where we were meeting my mum and stepdad for lunch.

They haven't been inside a restaurant since before lockdown. My stepdad would probably get Covid really badly and as my mum has still been working 3 days a week, they've really limited their exposure by just staying at home even as lockdown has eased. We had talked about eating outside, but none of the restaurants in the White Rose were doing that (even though some of them in "The Village" have tabled outside? So they could!). But Wagamama wasn't very busy and we were able to get a table by the door which my mum and stepdad were happy with. We were far away from others, so they were happy.

My mum has been to Wagamama before, a couple of years ago with me, but my stepdad never had. I knew they would like some of it, though. I recommended they try the steamed buns and the gyoza, because they're delicious and people tend to enjoy them. They went for other stuff too and they LOVED it. My stepdad got katsu curry and said it was really delicious, he was really happy to try it and said he wanted to go back and try some other things in there.

I went for bang bang cauliflower (one of my favourite dishes ANYWHERE), the steamed vegan buns, and the avant gard'n which I've had before. It's a vegan bowl with an "egg", rice, sticky seitan, edamame beans and more. I thoroughly enjoyed it. My mum wanted to make a couple of alterations to her food and the staff were very willing to do that, which is good.

We even had dessert! I wouldn't normally in there but it was a special occasion after all. I had salted caramel ice cream which was really nice. We weren't rushed out of the table and by the end there was only us and a couple of other tables in there, so it was lovely.

My mum bought Lee a new WOK! This is very exciting! We haven't had one for ages and usually use a frying pan for everything, but since I went veggie I've been thinking we could do with a wok again.

Lee and I had said we might go shopping after lunch, but it was after 3pm and we were both knackered, so we decided to just go home. The kittens were obviously happy to see us, and I had a little nap as I was very tired. I'd been going through some health stuff and not feeling well.

We watched a film together later and then Lee wanted to play one of his new video games, so that was fine! A low key birthday but still a nice one I hope.

I was wearing my Lindy Bop blue polka dotted dress which I love. My photo is featuring Jasmine! 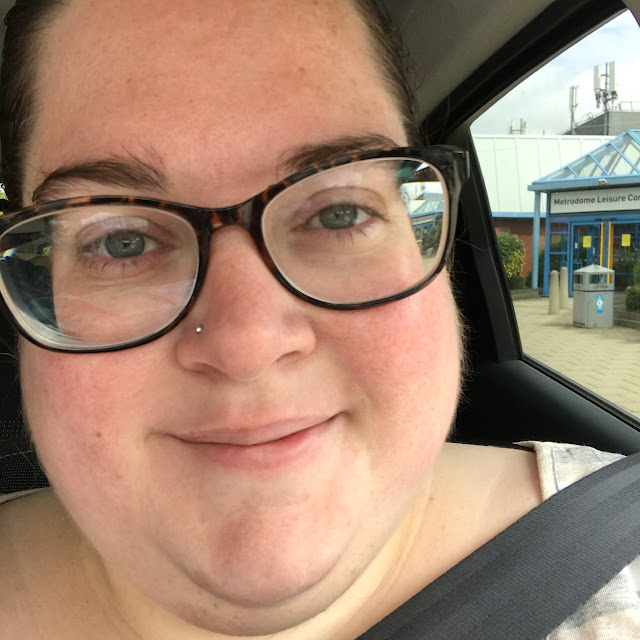 I took this just after swimming, to share on Instagram that I felt restored to life thanks to putting my body in water! 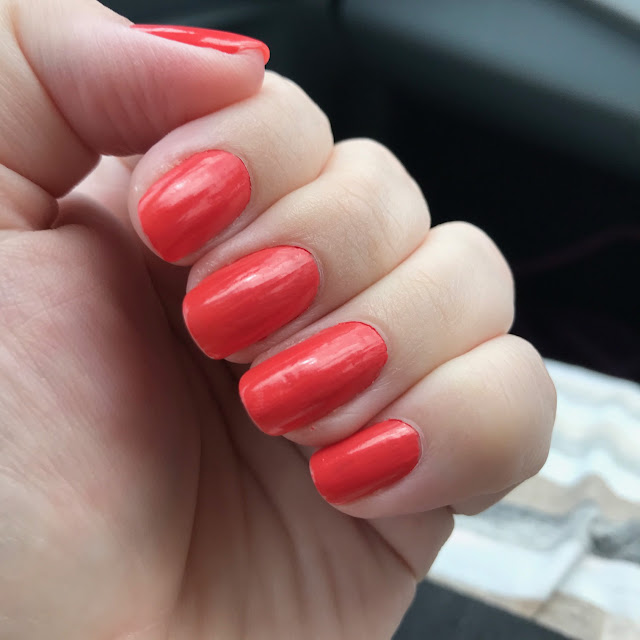 My nail polish was a Bourjois orangey neon one that I bought recently. It's nice but not very long lasting 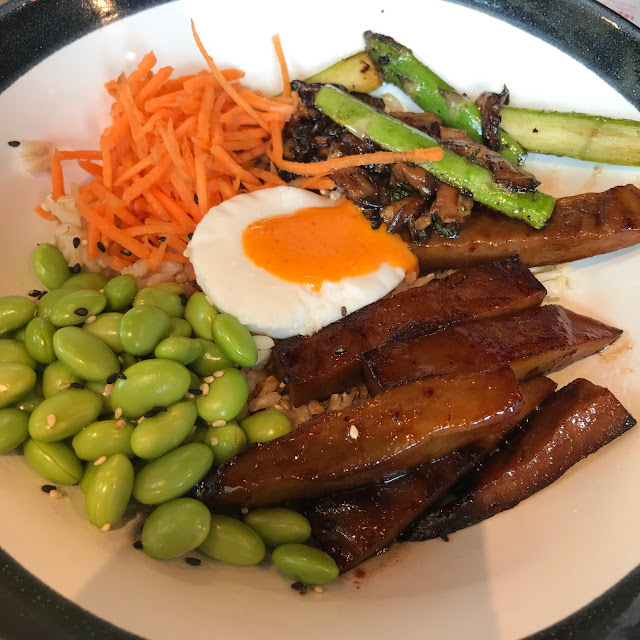 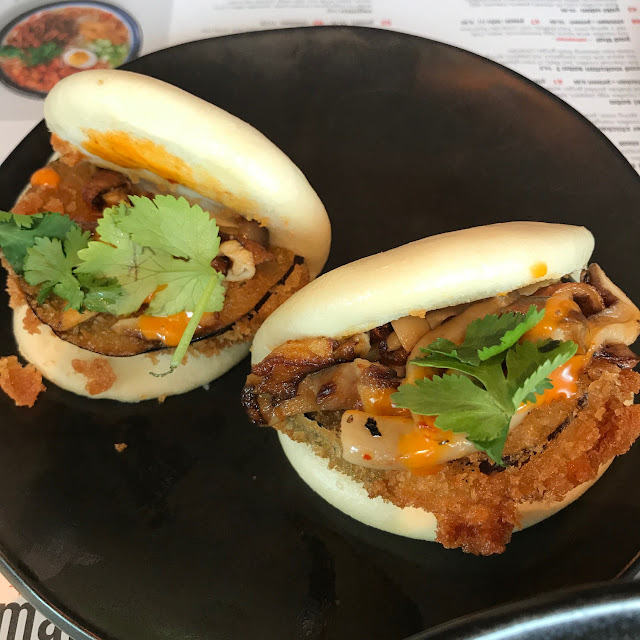 And my mushroom and aubergine steamed buns. I love these! 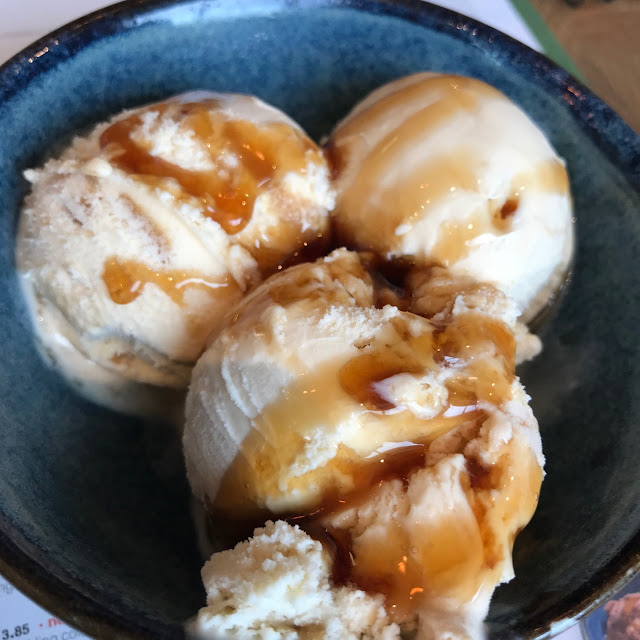 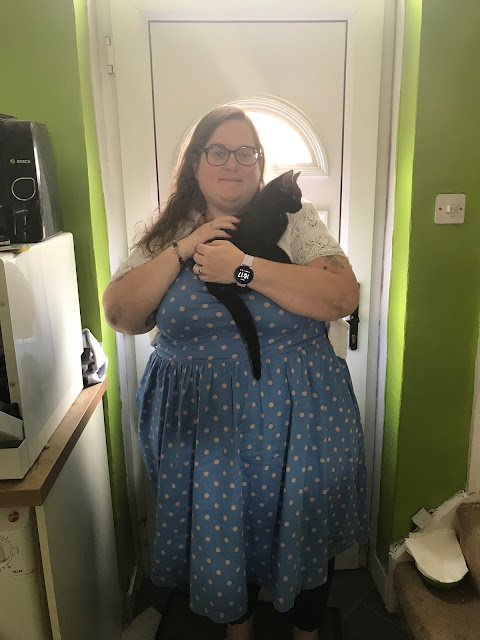 Posted by Rebecca at Wednesday, September 30, 2020