Recently I pulled out my jewellery making supplies to make some things for myself and some friends. I have a lot of beading/jewellery supplies, but it isn't something I do often because I'm not overly good at it and I find it takes a lot of time. Plus dragging all my supplies out is a bit of a pain! But Lee helped.
I've been collecting beads for over half my life now - I have liked making jewellery for over twenty years. When I was 14/15/16, I worked in a small hippy type shop in Wakefield, where I grew up. It sold tumbled crystals, geodes, handmade jewellery, ornaments, jewellery fixings - all kinds of things. I grew to hate the job but I loved learning about crystals and started buying some. I absolutely love fluorite - I have some really really pretty pieces of it. Back then, I made jewellery using fishing supplies, and even sold them at a few fairs!
Over the past few years I've got some better tools, and a ton of better storage supplies. I have several of those large plastic boxes with dividers in them, and I try to keep everything sorted out. I sorted the beads by colour and somewhat by size, which was very pleasing. They need sorting out again, which I think Lee and I might undertake as a job soon.
I've had a bead subscription for a while. I used to use Crafty Creatives, which sent quite a lot of charms as well as beads and fixings. However, I got fed up with them, although I don't remember why, and stopped for a while. In January 2019 I subscribed to Deborah Beads box, which is cheap and still lovely. Every month you get a few beads and some fixings, enough to make a few projects each month, so I find it good value for money. I'll probably keep that up for a few months yet, until I get fed up or something.
So anyway, I pulled out the jewellery supplies with the intent of making some earrings and bracelets for some of my closest friends. I wanted to send them all a little care package with some other bits in. Then I sorted through some of the Deborah Beads boxes that had accumulated over a few months, and as I was doing that I found some beads I really liked so made some things for myself. I didn't get photos of everything, but here's what I did get: 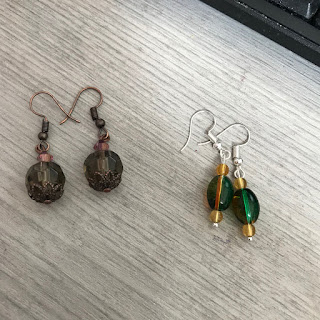 These were out of my subscription boxes. I've never used metal cups under beads like on the ones on the left before, and I like the effect. I like the antiqued bronze fixings here, too. I LOVE the green beads on the ones on the right, you can't see very well in the photos but they change colour and are really pretty 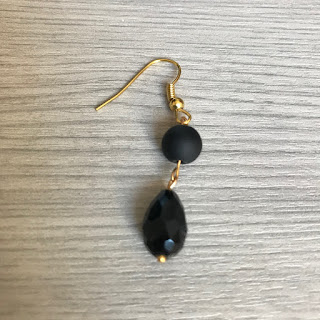 These fixings and beads came from my subscription boxes. I don't often wear gold jewellery, but I like how the black beads look against the gold. I have never done a join in the middle before, but I really like the effect - it makes the earrings swing and be nice to wear. I wore them when I saw my family and showed them off to my aunt, who also makes jewellery 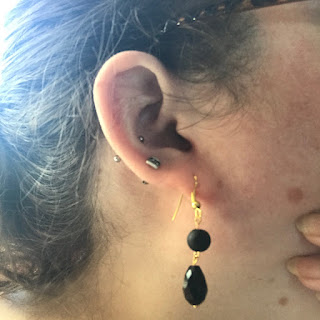 A shot of when I tried them on 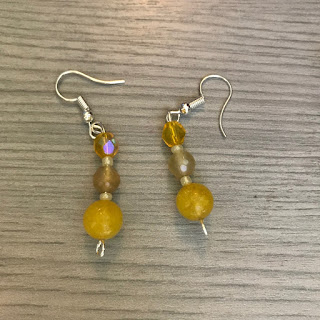 I love the beads at the bottom of these - they almost look like amber, although I'm sure they're just glass. I paired these with some beads from my stash. I have ton of earrings like this 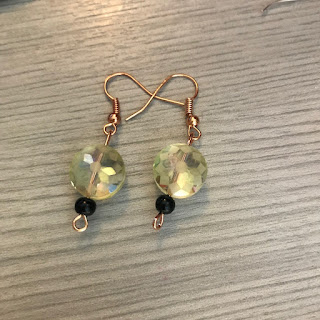 The big faceted beads here were out of a subscription box. I used rose gold wires and fixings here as I thought they set the beads off nicely 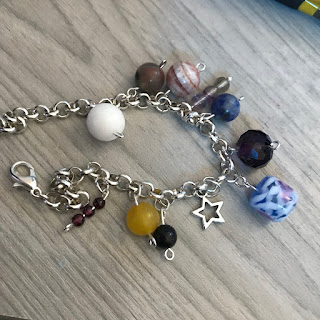 I made this bracelet for my friend Laura. She doesn't have pierced ears so I went for a bracelet. I cut a piece of chain and put a clasp on it. Then I chose some beads I wanted to use for Laura especially. I love the painted blue one in the middle. I thought she'd like a star charm. The small red beads on the very left are garnet, and the small purplish ones on the top fourth from the left are fluorite. Everything else is just glass I think. Laura received this and really liked it, which I'm pleased about 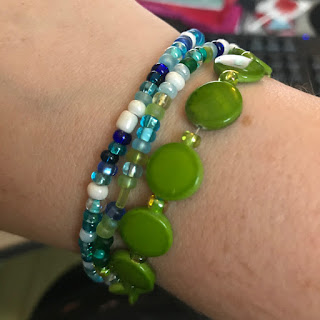 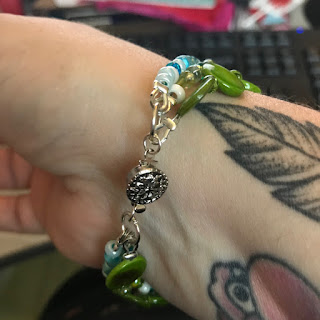 Finally I made this bracelet for myself. It was very complex and fiddly and took quite some time. First of all I made all three strands separately. The small blue/green/white beads on the left two strands are beads I've had for around FIFTEEN years. I got them in a swap I did with someone and there's loads of them. I made a strand (the middle one) that was just a mixture of all the beads - I didn't even look as I picked them up, I just threaded them. The strand on the left is all the blues, so I did pick them out. Then I had these green shell beads and thought they looked nice with the small green beads, so I put them together on the third strand.
These were fiddly because I strung them on wire and wanted to use one of the fancy clasps I have, instead of using stretchy elastic to string the beads on. So I used horseshoe shaped wire guardians at the ends of each wire, and used a crimp bead to keep that in place. I'm really pleased I persevered because it look really nice. I'll get better, I'm sure. I love the silver clasp I used too.
Posted by Rebecca at Tuesday, September 01, 2020