What I Wore Dec 19th

On the 19th of December we had to pop out for some Christmas stuff. While we were out, the new Covid rules were announced, meaning my aunt and uncle could no longer come to Wakefield to have Christmas with my grandma as they're in Tier 4, and we could no longer travel to Durham to see Lee's mam and stepdad. (Our bubble was going to be my mum and stepdad, and Lee's mam and stepdad, on different days). I feel for Lee as he hasn't seen his parents or any of his siblings since last Christmas. It's a long time. I feel like if the government had told us that would be the case we could have dealt with it, but to press on with five days of relaxed rules and then snatch them away at the last minute is just heartbreaking. I've been dealing okay with the whole pandemic, I think, but I'm upset and frustrated and bored and lonely now. Lee has been working full time throughout, so I end up sitting in the attic room by myself because I obviously can't disturb him much while he's working, so I've been very lonely. It's fine, I'm obviously safer staying in, but I miss my friends. And I just feel that if the government had done more at the beginning for people, and with clearer and more consistent messaging, we could be in a really different place now. It makes me angry.

Anyway, I was wearing a new skirt. I got it recently in my Simply Be order. It's a Joe Brown's one and it was in the sale so was less than £20. I love their stuff, but I find it quite expensive for what it is. So on sale is ideal for me. This skirt has two layers - the patterned on top and a black layer underneath. They're both cotton and don't have a lot of stretch, but there's some skirring on the back of the waistband which helps. I was surprised but in a good way when it actually fit me.

It also has little clips and hoops which you can clip together to make some flouncy bits, which I do like and which I would do in the future. As it was, I didn't do that the first time I wore it. My cats were interested in the jangling clips, though!

I wore it with leggings from Evans and a plain black top from Simply Be, but the skirt has a few colours in that you could pair it with. I think a red top would look lovely! The black under layer does stick out a couple of inches at the bottom, but I don't think that's overly clear in the photo. 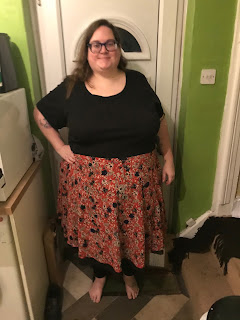 Email ThisBlogThis!Share to TwitterShare to FacebookShare to Pinterest
Labels: joe browns, simply be