If you know me, you'll know that I've really enjoyed the expansion in advent calendars that we've seen over the past few years. For the last few Christmasses, I've bought a Yankee Candle advent calendar. I've had the smaller ones before where you get tealights, although last year I got the mid price one which had a mixture of tea lights and votives. You can see my blogs about these here.

Last Christmas I got a wax melt burner as a gift, which I'd asked for because I wanted to try some melts. I had them as a teen but hadn't had any in twenty years. All year I've been using melts I bought, some from Wax Addict and some from Scentful Wax, who make lovely melts that have a great scent and which I would highly recommend. I say 'some' from Scentful Wax, I've spent an absolute fortune on melts throughout this year. However! I use melts every day and love them, so I don't feel too bad about it.

So as it came up to Christmas, I was thinking about a wax melt advent calendar. I saw an advert on Instagram for a calendar from a company I wasn't familiar with, so I took a chance and ordered it. The company is called Foxglove Fragrances and the calendar is quite big. Inside each door is a mini wax slab, made of three squares of wax. I would normally use two but three has been fine too. These scents have been all vaguely 'winter' themed, but not always specifically Christmas themed. They've all been really nice; I have really liked some and would order again. There's a bigger door behind #24, which I assume is a whole mini slab, so that will be nice.

In the middle of November a present arrived from my mum - a wax melt advent calendar from a company called Wax Ever! Thanks Mum! I hadn't heard of this company either but they were local to me, based in Rotherham. This is a smaller calendar, and each melt is shaped like a present and is maybe an inch by an inch. There's been a variety of scents here, including some that smell like famous perfumes, some that have been unsual, like velvet peony and oud, and some Christmassy ones. I've really enjoyed this range of melts and will definitely order again.

I've burned each melt at least once, on the day I opened it. I've had one in the morning and one in the evening, mostly. However, I've by no means used all the melt up in just one burning, so I've popped them out of my wax burners (I've got three now) and back into the bigger calendar where the doors are by far big enough to keep both melts. This means I've still got loads of wax left to use for January - I should imagine I can get at least one more burn out of all of them.

I don't know how much my mum paid for the smaller calendar, but the bigger one was £35 which included delivery, which I felt was fair, and was the same price as the Yankee Candle one I bought last year. I'm preferring melts at the moment - I think the scent throw is better - so I would order this again. I would order bigger slabs from both companies as the scents are really good! 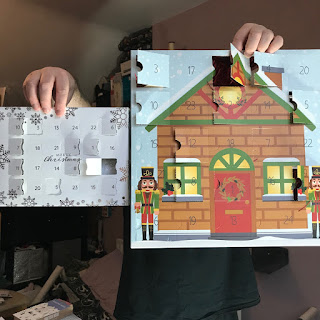 Wax Ever on the left and Foxglove Fragrances on the right 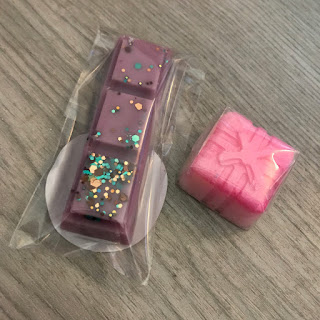