A Busy Day in June

I had a busy day in mid June and it was the first time I'd felt fully better since my surgery. I maybe pushed myself a little far because I felt a bit rubbish the next day, but I had a nice time so that's the main thing.
First of all I went to work, which wasn't too exciting but I did see some colleagues which is nice. I'm not sure when I'll be going back into the office, but for now I'm still working at home. I did get permission to upgrade the accounts package we use, which is very exciting for me as it'll do some things that it doesn't do currently.
I had plans to meet my friend Chloe for lunch, but it was really early for that, so I headed to a Tesco express near where I work. I rarely go in supermarkets anymore - Lee does the shopping and although he will of course buy me whatever I ask for, I like to go and look sometimes. I picked up fruit pastilles and jelly tots which are vegan now, and a bunch of other snacks and stuff. They'll last me weeks! I bought an orange Twirl for Lee. It was nice to have a choice of what I wanted!
I was still early for Chloe but I went along to the pub anyway. I got a table easily and got a drink and sat reading my book for a while. I'm glad I'd had the foresight to take it with me! Chloe was early too so she joined me about 12.15.
It's a pub that we used to go to a lot because my grandma lives just over the road from it practically, but it's changed chains a few times and the last few times I'd been it's been rubbish. But I noticed it had changed again, so I thought I'd give it a go. And I have to say, the food was nice. There wasn't a ton of veggie choices but enough for me. However, service was reallllly slow. It was 40 minutes before anyone took our order, and the main courses took forever to come too. We each had a starter and a main and while I don't think we would have got puddings, Chloe often likes to have a coffee after her food, but no one even asked if we wanted this. It annoyed me, especially because it wasn't that busy.
I had breaded mushrooms and halloumi fajitas, both of which were nice. Like I say, it wasn't the food that was the problem.
I got home just after 3pm and since it was so sunny I went outside to sit under the parasol and play with the kittens. They like going outside and like exploring and eating grass. Lee is in training at his new job, so that finished about 4pm and came outside with us. I was tired, but at 6pm I was going out again!
My book club usually meets monthly in nearby Penistone, but of course in the pandemic we haven't been able to do that, so we've been meeting on Zoom. We've kept that going and will for the next few months at least, but the leader Ceri was eager for some of us to meet up at the pub where we usually go. So 9 of us met up outside at two tables, nice spread about. I wasn't sure about going but I had a lovely time chatting with people and was really glad I'd made the effort to. I didn't get home until 8pm! By which time I was knackered!
I was wearing this black dress from Yours which I showed a few weeks ago. I hope you all like my witch's familiar, Jasmine. 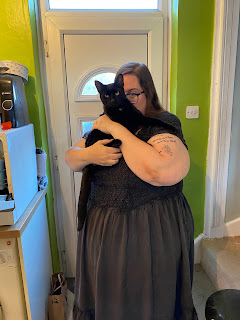 Email ThisBlogThis!Share to TwitterShare to FacebookShare to Pinterest
Labels: friends, yours, yours clothing