Lunch Out at Cannon Hall

Towards the end of June Lee and I took our bikes for mending. The government had a voucher scheme going where you would get £50 off a service and repairs for your bike; we both signed up in March or something. It's ended now sadly, but it was so helpful for us. We took my bike first and it took out it needs some TLC we can do, but it only needed the £50 service and less than £20 worth of repairs, so that was excellent. We knew Lee's was in worse shape - both bikes were actually in the cellar of our house when it flooded and I was worried they would both need writing off. I love my bike - I got it off eBay years ago and paid very little compared to what it's worth. It's really solid and has nice thick tyres for my nice thick body, haha. So I didn't want to get rid of it. Halfords said it's in good condition but needs a good clean. We'll do that soon!
Lee's bike it turned out would cost us £80 after the £50 service. That seemed fine, we were expecting it to be more and we've decided to invest that money in it with the view of buying a new (secondhand) bike for Lee in a couple of years if we need to. This one came out of a skip originally! My uncle rescued it.
We dropped the bikes at home and then completely neglected to feed the kittens any lunch before heading out ourselves for lunch at Cannon Hall. I really wanted to get out a little bit so I thought we'd chance it. I was expecting the cafe to be heaving as it usually is on a weekend, but instead there were plenty of tables and we walked straight in. The menu isn't huge but there were a few veggie options. I went for a crispy halloumi club sandwich that had beetroot hummus in it too. It was so delicious! Lee had a chicken baguette that he said was nice.
Afterwards I really wanted a whippy ice cream from the ice cream van that is usually in the car park, but it wasn't there! Disappointing. We drove up to the top of the park in case there was an ice cream van up there, but there wasn't. But there is an ice cream parlour up there, so Lee went in for ice creams and I went to get a picnic table outside on the grass. Again, I was expecting it to be busy and it wasn't. It was the day before Father's Day though so maybe everyone was planning to go then instead.
I had chococolate and bubblegum ice creams which were both delicious. It was nice to sit in the sunshine and we did the same when we got home, too, in the garden with the kittens. They love it, they like to explore and eat grass and sunbathe.
I was wearing this Sprinkle of Glitter dress which is one of my favourites, I say this every time I wear it but I do! It's comfy and pretty and I like it with leggings and sandals. I was wearing these new sandals that I got last year in the Dorothy Perkins sale, but I barely had chance to wear them. I've worn them loads this week already! Perfect to slip on and off.
It was a lovely day - I'm glad we got outside and had a bit of sunshine while it wasn't raining! 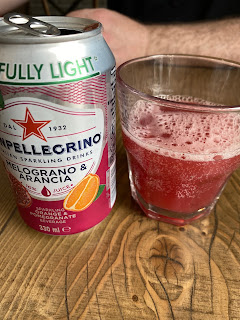 I love pomegranate San Pellegrino and was excited when it was on the menu! 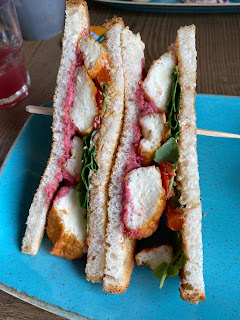 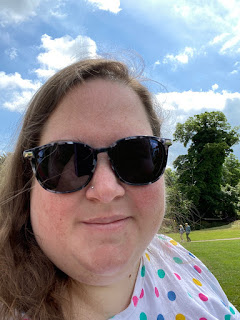 Me in the sunshine waiting for ice cream 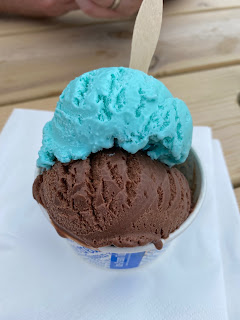 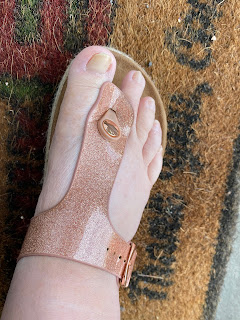 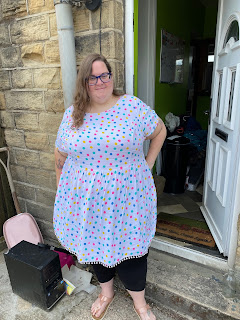 And my lovely Sprinkle of Glitter dress, I love how colourful it is 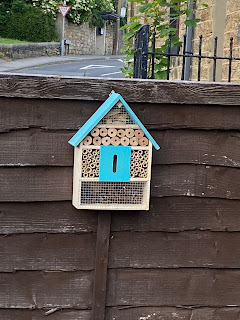 Oh and very excitingly we put up the bee hotel I bought months ago. I just hope we get some bees in it now!
Posted by Rebecca at Tuesday, July 27, 2021

Email ThisBlogThis!Share to TwitterShare to FacebookShare to Pinterest
Labels: lunch, simply be, sprinkle of glitter