Day Out in York

It was my friend Sam's birthday on the 10th of June, so she took herself off for a few days. She stayed in York on the Friday night and asked Jac and I to meet her for bottomless brunch on Saturday morning. I wasn't sure how I'd feel - I was still suffering the after effects of surgery - but as the week wore on and I felt better than I had, I decided I would go. Lee took me, he went to see a friend in York and then came into the city centre and went in some shops before meeting up with us.
We met at the Slug and Lettuce and had their bottomless brunch. I had a veggie breakfast which was nice enough. They were pretty good at supplying us with drinks. You get two hours which was plenty.
After breakfast we decided to walk along to Holy Trinity Church on Goodramgate which is where Anne Lister and Ann Walker took their sacrament together which they regarded as marriage vows between them. There's a plaque there now and the church is open and still has all the old box pews inside. It was pretty cool to see.
Then we walked to Evil Eye on Stonegate which is one of my favourite bars ever, I first went in there when I was a student in York (I was at York St John). It's famously the place where my friend Laura accidentally chucked a drink all down my pale mint green top. They do a cocktail called a Constantine, which tastes like Skittles and is so nice. We had a couple of drinks in there, and Lee met us there for a bit before he had to go back for the car. He picked me up near the Minster and we got home about 4pm. I was absolutely exhausted so got into bed for a rest. I've had to do this a lot since being ill in April and definitely since surgery. I really need to learn that it's okay if my body needs it! I will get better I'm sure, but I definitely feel a bit rubbish in the meantime.
It was a lovely day though - Sam and Jac and I haven't been together just the three of us since December 2019, so it was lovely to do that. 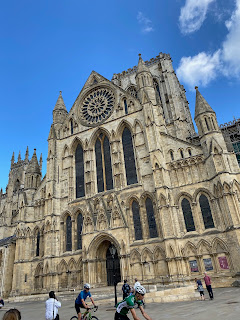 Gorgeous to see York Minster in the sunshine. I love York very much and always like to go 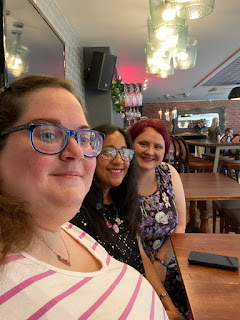 Reunited and it feels so good! 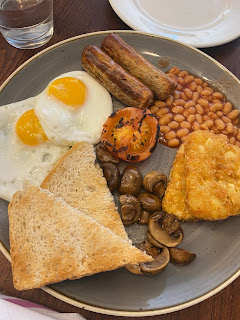 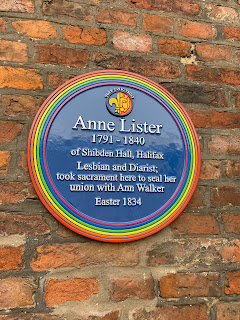 The plaque to Anne Lister at Holy Trinity Church 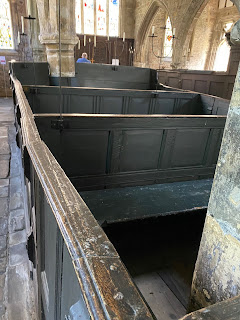 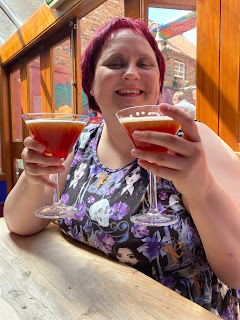 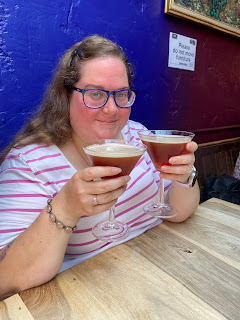 Me, looking hot and bothered, with cocktails 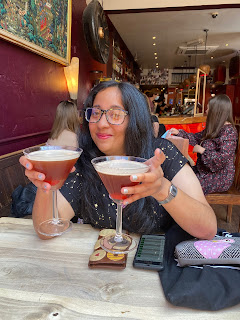 And finally Sam with cocktails too!
Posted by Rebecca at Wednesday, July 14, 2021