At the end of April I went to Manchester to see my friend Amy. I saw her in February but we had been meaning to get together for a bit of chat and craft time, so I headed over. There was an accident on the way there so it took me a bit longer than it should have, via a diversion, but I got there. We chatted at Amy's for a bit then left her girls with Mike and headed to the Tea Hive in Chorlton for some lunch.

I've been there before but not for ages. Amy likes it as they have plenty of vegan options. I went for a triple decker halloumi sandwich which was lush - definitely did not scrimp on ingredients at all. It had tzatziki and hummus and olives in it too. I also had an orange hot chocolate which was lovely.

It wasn't too busy so we felt we could linger, and we both did a little bit of cross stitch. Amy wanted some pointers as I do so much of it! We ordered cake and hot drinks a little while later too. I had chocolate salted caramel cake and a coffee, which were both lovely.

We wandered across the street when we left the Tea Hive to Lily's deli. We've been to the restaurant in Ashton before, and I've been to the deli before and bought delicious snacks. I bought some puri, and some snacks for Lee and I to share. Oh, I had also bought him a brownie in the Tea Hive too!

We headed back to Amy's house. It was getting on at this time but I didn't want to get stuck in traffic, so we sat in the kitchen for a while with both girls and Mike. Amy and Daisy were making some dandelion honey and some Easter nests, and I played with Robyn while she was sitting on the table. It was a good time!

I finally set off back about 6.20. My satnav told me that Woodhead Pass would be the quickest way and I stupidly believed it. It ended up taking me nearly two hours to get home! By that time I was so tired and in pain that I went to lie in bed until it was time to go to sleep! 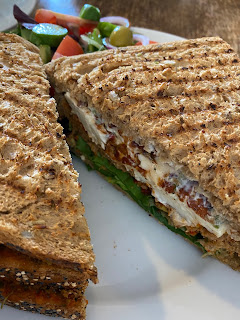 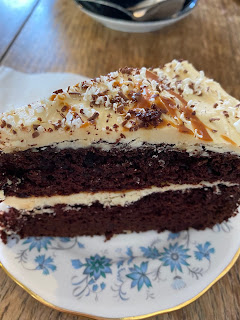 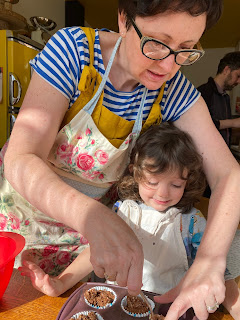 Amy and Daisy making Easter nests. The whole family is vegan hence the other project of dandelion honey 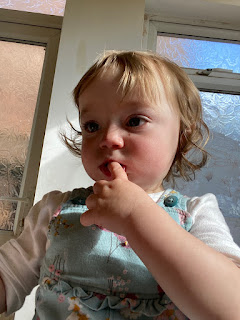 And here's little cutie Robyn (I was just next to her to make sure she didn't fall off the table)
Posted by Rebecca at Wednesday, June 15, 2022