The weekend of the first bank holiday in May we went to Durham to see Lee's family. We hadn't seen them since Christmas so I thought it would be nice to go up and see everyone. Plans got changed a couple of times but we stayed at Lee's dad's house. He and his wife are about to move to Chester-le-Street so this might be the last time we stay at their house near where Lee grew up. It'll be weird!
We took our cats to my mum's on the Saturday and had lunch there before setting off (thanks Mum!). We got to Lee's mam's about 2.30 and stayed there for a while talking to her and Lee's stepdad before going to Lee's dad's. We went out in the evening with Lee's dad and Mary, to the same Italian restaurant we went to at Christmas with them. It's really nice - it's all fresh food and they did a vegetarian calzone for me even though it wasn't on the menu. I knew I wouldn't be able to eat it all so cut it in half to bring half home to eat on Monday - which I did, and it was delicious!
On Sunday morning I had a bath in the massive bath with a bath bomb which was lovely. We had breakfast then headed to Lee's mam's. Lee's brother Andrew and his girlfriend Libby were already there, and then Lee's friend Paul and his wife Lianne arrived too. Paul is an honorary member of the family at this point haha. Andrew made stir fry for everyone - vegan for me, Paul, Lianne and Lee, and chicken for everyone else. We played Trivial Pursuit which was stupid, and then a different game. Lee's sister Kim turned up but I didn't get much chance to speak to her, which was a shame!
We stayed there until about 7pm and then headed back to Lee's dad's. He and Mary had thoughtfully bought us a bunch of vegetarian food from Greggs as they were concerned about what they could feed me so I had a pasty and a vegan sausage roll (I'm veggie not vegan, as a reminder). We watched a film and chatted before bed.
In the morning we popped in on Lee's mam before setting off home. We picked up the cats and came home and relaxed for the rest of the day!
I forgot to take outfit photos because I was too busy having fun, but I did get a few photos... 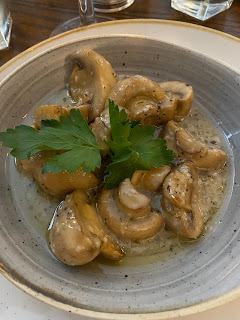 Funghi al aglio, which were delicious 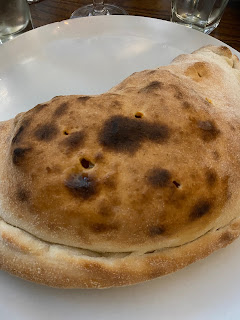 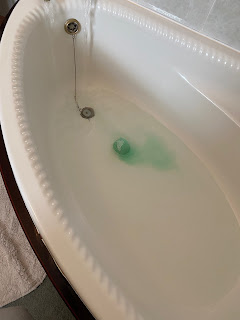 I think this was an Avobath bath bomb from Lush, but I'm not sure. My stepcousin bought Lee and I a few each for Christmas which is lovely! 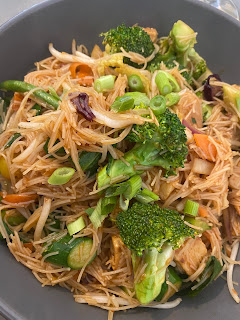 Vegan stir fry - it was delicious 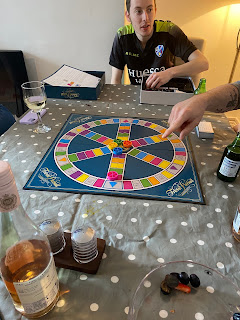 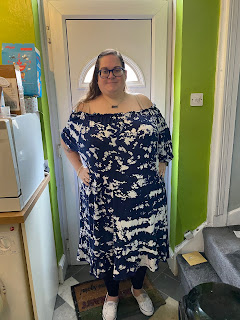 I did get a picture of my outfit on the Monday - this gorgeous clouds dress from Yours, plus my black footless Snag tights, and my white ballet Converse. It's a lovely spring outfit I think!
Posted by Rebecca at Tuesday, June 21, 2022