I mentioned to Lee in early April some time that we should go for another spa evening as we both like them and they're very relaxing. He had a look online and managed to find a deal for the Twilight Spa at Gomersal Park Hotel near Batley, so he booked it for the end of April. It was a very busy period for me but I knew I would like it, so it was fine.
We actually got married at Gomersal Park Hotel way back in 2005! My dad had been the quantity surveyor on the extension, and we liked the hotel and the suite in which we got married. We stayed over a few years ago, maybe on our tenth wedding anniversary, but I can't remember exactly when. The spa wasn't there when we got married so I'd wanted to try it. We had it booked to go in November 2020 but thanks to Covid and the tiers we were in, it had to be cancelled. So I was glad Lee found a deal.
We arrived around 4pm and found the spa reception. We were offered a welcome drink of juice and then got changed and were given a little tour of the spa. There's a small pool, experience showers, a sauna, steam room, ice, foot spas, and then a hydrotherapy pool/hot tub which is outside. We went in there first of all - it was absolutely gorgeous. We then used the foot spas too.
The deal included a 30 minute treatment, either a facial or a back massage. I went for a facial at 5pm while Lee had a back massage. I really enjoyed mine - she did a lovely facial and left my face feeling really soft, and she also did some of a massage in my hair which was lush. Lee isn't sure if he liked his massage or not - he's never had anything like that before!
We went in the pool for a little bit before we had pizza and prosecco at 6pm. Lee had a margherita and I had a veggie pizza with goats cheese and vegetables on it. They were delicious! Since Lee doesn't drink alcohol I go to have his glass of prosecco too which I'm not complaining about! Once we'd eaten we headed back outside to the hydrotherapy pool as it was just so lovely.
There weren't many people in the spa which obviously made it feel really special and luxurious. We went and swam in the pool for a bit - it was also nice and warm in there which made my body feel better. Then we went back into the hdyro pool right up until just before 8pm when we had to get out. 4 hours was a really lovely amount of time to spend there though!
We got home about 8.40 and once again got into bed as I was so tired and achy. Lee made hot chocolate and we watched the latest episode of Derry Girls which was really nice. I would recommend the spa for sure if you're local! The dressing gown fitted me pretty well even though they were all the same size, and the treatment beds were nice and wide and sturdy so I felt really safe when I was lying on it. Definitely one of the better spas for plus size people! 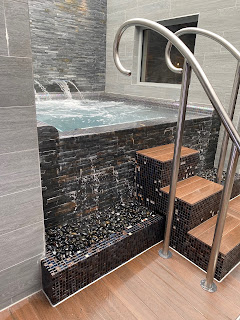 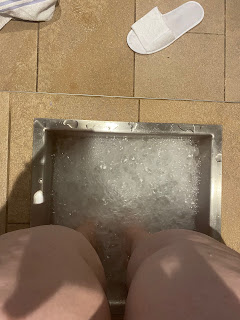 Feet in the foot spa - this was nice and warm too 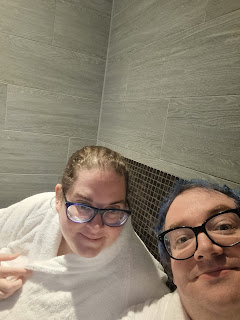 Lee took this one of us 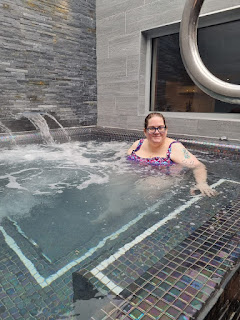 And this one of me outside in the pool. My swimming costume was from Simply Be earlier in the year - as we swim at least once a week I tend to wear through costumes quite quickly! 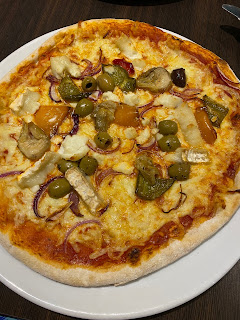 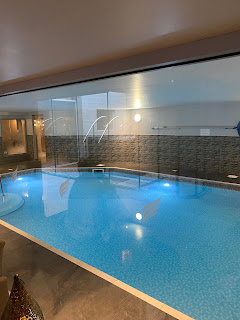