We had a nice Easter weekend. Lee had had a cold for the week beforehand - not Covid, but it wiped him out quite badly. By the weekend he was feeling a bit better. On the Friday we tidied the bedroom and then chilled out which was nice. I watched a good film with a friend in the evening which was nice and which also felt like early lockdown again!

On Saturday we made chocolate mousse in the morning. I had more success with the whisking of the egg whites than I've ever had before, and the chocolate folded in really nicely.

Then we started sorting out our huge attic room again, I have so much stuff in there and it gets unwieldy and I can't find stuff. So we started sorting stuff out, going through the shelves. We didn't completely finish but we made a good start. We also need to get decorating my dolls house, but it needs painting first of all. I did find lots of white acrylic paint so I can do that.

In the evening we made a nice meal and then had two of the chocolate mousses, which had set wonderfully and tasted lovely. We'll be making those again definitely!

On Sunday we headed to my mum's house about eleven o'clock. I had requested that my mum make a big Easter Sunday dinner. It turned out my aunt and uncle were also up because they had been clearing my grandma's house again with my mum and stepdad. My grandma is settling into her new home but was only allowed out on the Sunday as she'd been unwell. My mum agreed to make a dinner, with chicken and then a beefless Wellington for me, but as everyone was at church, I volunteered that Lee and I go over to get things going, or we'd have been eating much too late! My mum left stuff out on the side and it was like that round in Masterchef where they have to try to figure out what the person before them was trying to make. Absolutely bonkers. But everyone arrived at my mum's about 12.30 and dinner was ready just after one, so it was a win! It was delicious.

We stayed at my mum's until late playing games and looking at photos they had brought from my grandma's house. My grandma went about 7, maybe a little earlier. The rest of us had sandwiches for tea. We had to taste wine for my cousin's wedding too, which was so tough obviously! Lee and I got home about 11pm.

On Monday I was up early to go to the world snooker championships in Sheffield with my mum! My mum loves the snooker and always watches it. She used to go every year with my dad, grandma, godfather, and his friend. Then my dad died, and a few years ago my godfather and his mate decided it was too expensive (it is expensive!) so she just went with my grandma. Then my grandma got too disabled to go, so my mum hasn't been in a few years. It's different now as well because you have to enter like a lottery for tickets. But my mum asked me last year if I would go, so I said yes. I wouldn't watch it on TV by choice, but if I'm at my mum's I'll watch it. It's different in person, too, the atmosphere is pretty good. I went once when I was about ten years old and sat on the steps because I couldn't see - you could see my white socks on the telly! But I haven't been since then.

So Lee took us to Sheffield and we went in for the first session at 10am. We were watching Anthony McGill versus Liam Highfield to begin with - Liam was down but rallied a little bit, but Anthony ultimately won. We left before the last frame as it was already past 1pm and we needed to get lunch before the 2nd session which started at 2.30. One of the pubs opposite the Crucible had a barbecue outside selling burgers and hotdogs, including vegan options, so we each had a hotdog. It was lovely! In the square outside there are big screens showing the snooker for the entirety of the tournament, which is pretty cool if you don't manage to get tickets.

The second session was long, so long. We started off watching Mark Williams versus Michael White, but Mark only needed a few frames to win that match. He is left handed as am I so that was quite cool to see. When that finished we had an interval, and then the curtain went up between the two tables so we could see the end of Neil Robertson versus Ashley Hugill. Ashley is from Yorkshire and is a new player, so he had done well to get 3-1 up against Neil (who is a former world champion). However, Neil won the next five frames meaning he was 6-3 up by the end of the session. My mum did ask me at 5.30ish, in between frames, if I wanted to go, but when we checked the trains we had just missed one, so I said no, we may as well stay until the end. It ended about five to six. We walked down to the train station, bought tickets and waited for the 6.30 train.

It was a long day but ultimately very fun. I liked watching the snooker live. There weren't many women there generally, and most of them were with men, so as two women by ourselves we were definitely in the minority. We have tickets for the Seniors championship at the beginning of May too, so we're going to do it all again!

I was absolutely knackered the next day and would have stayed at home, but I had to process payroll at work so couldn't! 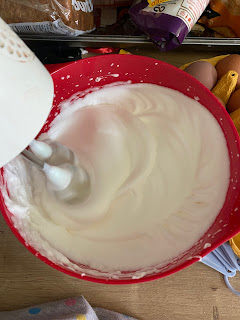 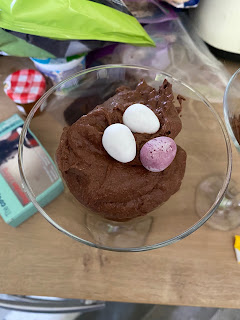 And here it is - so yummy 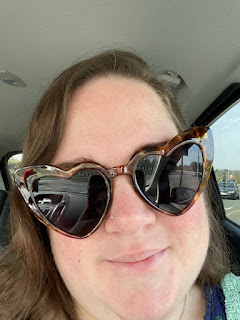 Sunday, I took this photo in the car as I'd put contact lenses in and could wear my fun sunglasses 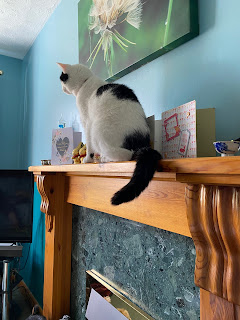 Ruben sitting on the mantelpiece which is a place he definitely shouldn't be! Clearly this is what he gets up to when my mother isn't in! 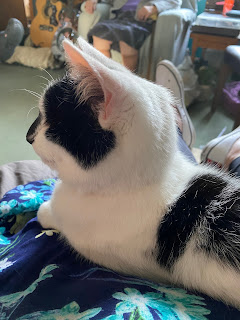 Later he sat on me 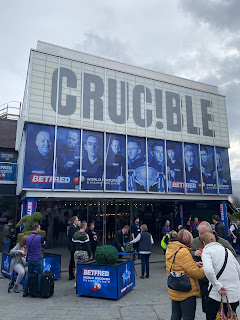 Outside the Crucible first thing on Monday morning! 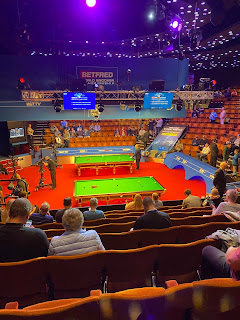