At the beginning of December I went to see Queen with Adam Lambert  in Leeds. It was amazing, a real once in a lifetime experience, and I got a few photos even though they're not amazing. It was at Leeds arena, the second time I'd been there inside a month. I do like it for an arena, it has decent views wherever you're sitting and it's really easy to manoeuvre around outside. I parked in the Merrion Centre and then met Sam for tea in Smoke Barbecue. It was delicious, I'll have to go back when I'm not in such a rush. I had a mac and cheese burger and a delicious vanilla milkshake.

Sam and I went over to the arena about 7.45 and met up with Stacey and her mum Julie. The show started around 8.15 and they played for two hours. The setlist was huge and was everything I wanted to hear!

Now, I'm a fan of Adam Lambert anyway. I got into him a few years ago and really like his debut album For Your Entertainment. He has such a fantastic voice and I love his look. A couple of years ago he sang with Queen on a New Year's thing and I liked it. I'm also a huge Queen fan - I was raised on them and both my parents loved them. I love Freddie, of course I do. I know that Adam is no Freddie - but neither does he try to be. He spoke on stage about how much of a fan he is and how it's basically a dream come true to sing with Queen, and how there's only one Freddie Mercury. He sings a lot like Freddie, but not exactly the same, and the effect is brilliant. I really, really enjoyed it.

About five songs in, Adam and drummer Roger Taylor went offtsage and Brian May came right to the front of the stage. I knew from the opening chords that he was going to sing Love of My Life and well, I was finished. It is a song that is so closely linked to my dad, and I haven't listened to it on purpose since he died 9 and a half years ago. I burst into tears, because the song is so emotionally fraught for me. Stacey very nicely cuddled me throughout the whole song. Afterwards I said I hadn't listened to it in nearly a decade and she pointed out that if there was ever a place, this was it: Brian singing it live on stage! She's right, and I'm so glad she was so nice to me - I know she misses my dad too. He was an important figure in her teenaged life, something which really means a lot to me. It was amazing.

Highlights for me were Killer Queen, Love of My Life, and Radio Ga Ga, but the whole setlist was pretty fab.

The crowd was great, singing along to every word. I had such a great time, I think Adam is a really amazing singer and did Queen proud. 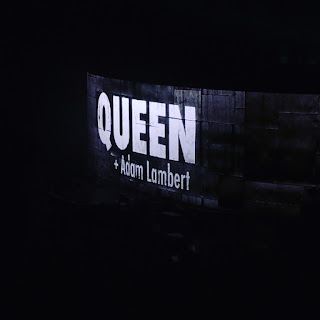 Before the show started 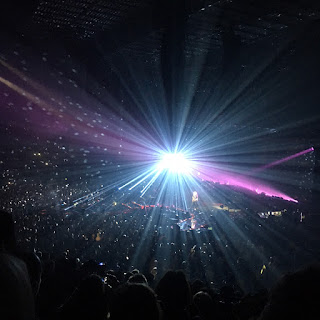 Lights in A Kind of Magic, I think 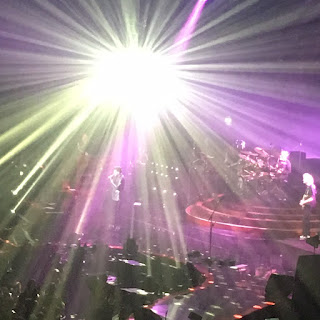 You can see Brian on the right here 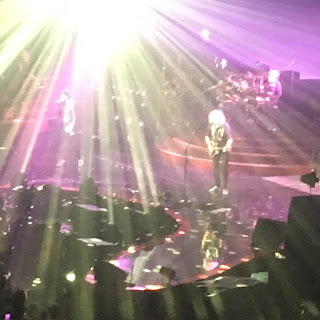 And here, too. Adam is there I promise, on the left 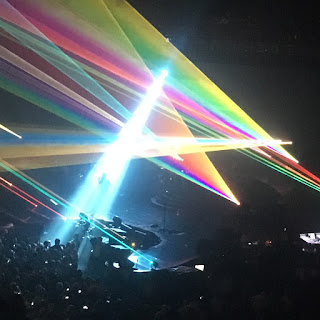 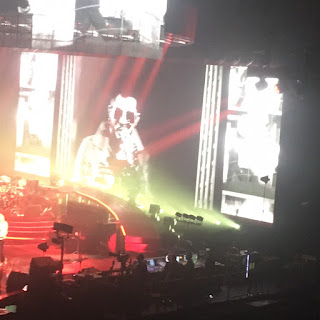 I particularly liked this outfit of Adam's, nearish to the end 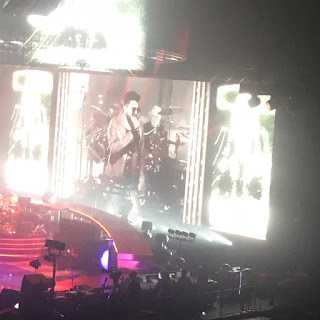 The screen was at the back, and it sometimes had footage of Freddie and sometimes of Queen symbols, it was really good 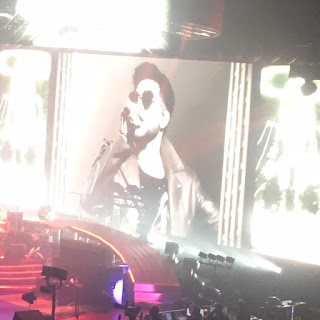 He's so good, I love him 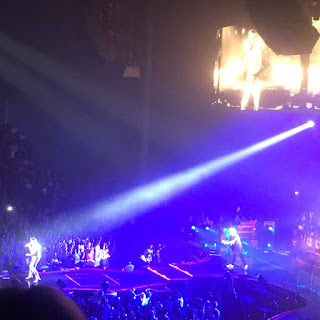 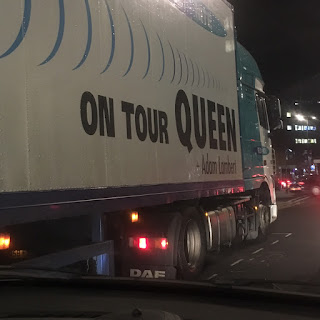 Getting out of the car park took me about 50 minutes. It's directly across from the arena so it fills up quickly and obviously you're all trying to get out at the same time. But, once I'm safe in my car with water and music, I don't really care how long it takes me to get out. These kit vans were just after I escaped!
Posted by Rebecca at Friday, December 22, 2017