Meal Out in Wakefield

At the end of August I'd made plans to meet up with my friends Katie and Sheryl. I went to York St John with both of them as undergraduates and we meet up every now and then, usually in Wakefield as they both live there and I'm close enough (I'm from Wakefield originally). Katie suggested going to Robatary, which is quite new in Wakefield, so I booked a table for 7pm.

It's in the place of a restaurant that I really like called Qubana, which has moved into the old Barclays bank building, so I was familiar with the place. I arrived first and went to the bar. The decor is really different now and feels quite opulent with quite a retro vibe too. I liked it. They had a menu of 6 cocktails which were on two-for-one so I ordered two Mai Tais and waited for the others.

Katie arrived and had my other drink and then we sat down. The booths are really squishy and comfortable, with blue velvet seats. I liked them a lot! We got to looking at the menu while waiting for Sheryl.

The food is described as "pan Pacific" so there's some American stuff, some Chinese, some Japanese, and so on. There's a selection of small plates which can be shared like tapas or eaten as a starter, and then there's a ton of main courses to choose from. I was intrigued by a lot of the menu and utterly couldn't make up my mind, but Katie and I have pretty similar taste in food so we decided to share some dishes like tapes. We had the American platter, some sweet potato fries, the shredded duck pancakes, and tempura chicken. When they came they were all yummy but some were a bit cold, which was a shame. But by and large I liked them.

There were a few desserts; Sheryl had a brownie (she had katsu curry for her main course which looked yummy) which is the one I would have gone fore. We all had a dessert cocktail - Sheryl and I went for a candy floss one and Katie had a white chocolate martini. Mine was yummy. I was impressed with the cocktail selection actually - the ones on two-for-one were varied. We tried four of them and I would drink each of them again although I liked the Chinese Cosmopolitan best.

I wore this black and floral dress from Yours; I've posted it before. It's one of my favourite dresses but I haven't worn it in ages! I felt really nice so took a toilet selfie, sorry it's so dark! 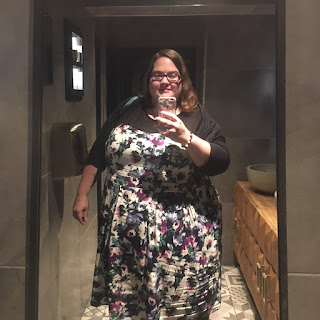 Dress - a bit creased from how I was sitting I think 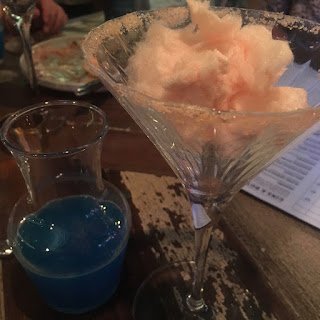 Candy floss cocktail complete with popping candy on the outside 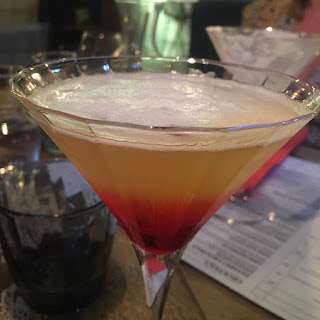 I'm not sure what this one was, but it was nice, and I really liked the glasses!

Email ThisBlogThis!Share to TwitterShare to FacebookShare to Pinterest
Labels: restaurant, yours