What I Wore September 10th

I headed off to my craft club on the morning of the 10th of September. I go most weeks; it's at Penistone library from 10-12.30, so only about fifteen minutes drive from my house. There's about 30 members, but that many people never come at the same time so there's anything from half a dozen to eighteen of us. This day there were about 13, with a couple of people popping in. I really like it; I just take my craft and get on with it and listen to the conversations around me for the most part, although I'm friendly too obviously. Some people start packing up around 12, but I usually stay until half past and do "just one more stitch".

Afterwards I popped to the shop for some lunch. I'd had some kind of stomach bug which meant I'd not been eating much, but I finally felt a bit better so got a sandwich and a chocolate twist :)

I got this top off Bettie; she'd bought it in H&M when rushing, so she'd not looked at it carefully and didn't realise it had the "frilly bits" on the sides, which she didn't like. She thought I would like it, and I do. I hadn't got round to wearing it as I've been having problems with nude bras, in that I can't find a decent one, but I was late to craft club so just pulled it out and put it on with an orangey bra underneath. I decided it utterly didn't matter and I honestly don't think it does! It's a nice soft material, really comfortable to wear, and I like the style. I'll definitely wear it again soon! 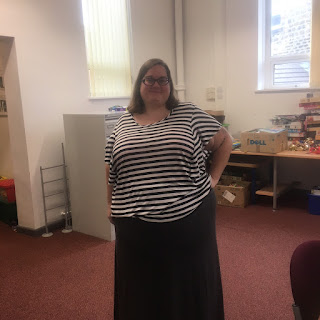 Email ThisBlogThis!Share to TwitterShare to FacebookShare to Pinterest
Labels: h and m