Friday morning saw us docked in Cannes. We had decided to stay on the ship after three days of getting off, so we took the whole day to relax. We weren't docked in the actual docks in Cannes, but we were anchored a way off shore with a tender to shore, so we enjoyed watching that go backwards and forwards a bit. It was another gorgeously sunny day so we sunbathed and swam.

I was reading the Power which I reviewed here, have you read it? I found it very strange but I was glad to read it on holiday when I could concentrate just on it and not get distracted by anything else. I didn't love it, and neither did all of my book club, but I am glad I read it and can have an informed opinion.

In the evening we had cocktails in O'Sheehan's bar which we had avoided thus far because it was like a Wetherspoons, but the drinks were nice. The sea was quite rough so Lee felt a bit ill, and it was worse the further down the boat we were, so he struggled a bit over dinner. (Even though we would call it tea, we felt like on a cruise ship you had to call it dinner). We played on the 2p machines in the casino afterwards, which had tokens in not 2ps, but it was really fun anyhow. I got a souvenir mug and my mum bought herself a Guess handbag - it's absolutely gorgeous!

The sea was quite rough overnight and I found it hard to sleep as my feet would end up above my head, but it was the worst rocking we had and it still wasn't that bad. 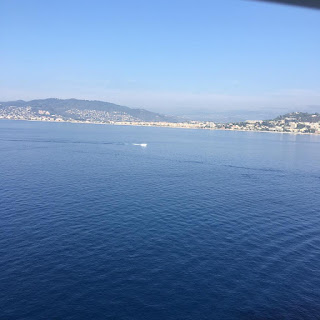 Cannes from the sun deck. Using binoculars we could see a lot 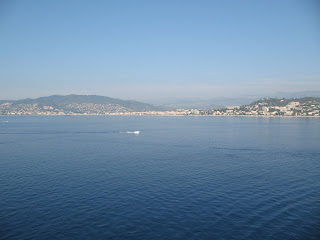 Same photo but from the camera not my phone 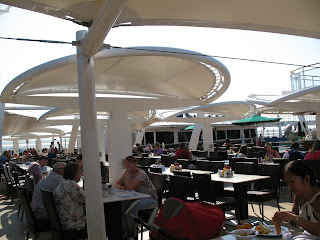 The sun deck at breakfast time 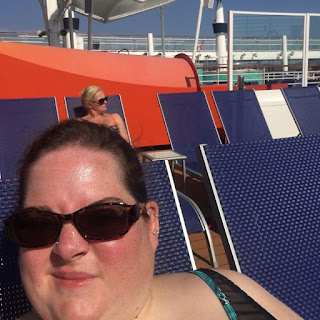 Sunbathing in the afternoon. I wasn't trying to take a photo of this woman I promise! 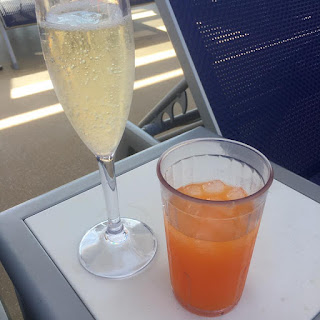 Afternoon prosecco and mango juice from a machine 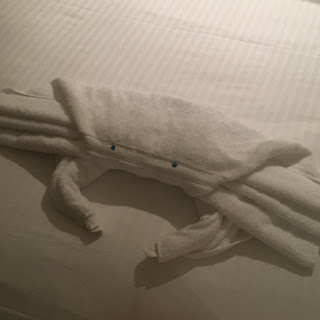 A different crab for the evening!
Posted by Rebecca at Saturday, November 17, 2018