I joined in two Secret Santas in 2018, down from previous years because I'd found it really stressful in 2017, and because I had a bad experience with a swap in the middle of 2018 when I was told that what I'd sent in a random swap wasn't acceptable. That made me really sad because it was a package that I would have been happy to receive, and I had put thought and effort into it. So I decided to just do a couple of swaps. One was Janet's Thrifty Christmas swap which I've done for years now and which requires you to be a bit thrifty with gifts, and one was through a Facebook group and it required a couple of gifts and also a letter.

I got back some lovely presents and wasn't disappointed at all! I also got a thank you card from the person I sent to for Janet's swap, which was so lovely of the recipient and really brightened me up.

Here's what I got:

Firstly these gifts were from the Facebook group swap. The little vial has rose quartz crystals in it, which I love. I also really like the cloud sticky notes! I use sticky notes a lot. 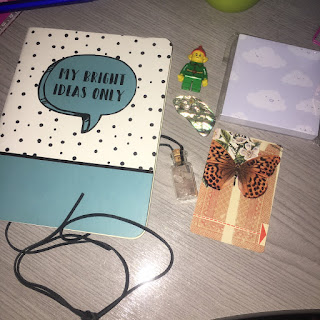 Secondly these gifts were from my friend Cath, to say thank you for the Star Wars cross stitch I did for her partner, so they're not a Secret Santa but I was taking photos of the same time. I've stuck the stickers into my bullet journal (yeah I'm one of THOSE people, although mine is a mish mash of stuff) and I absolutely LOVE the Welsh love spoon. I've never had one before, so I love this especially as it was a gift from a friend. I'm going to put it on the wall. 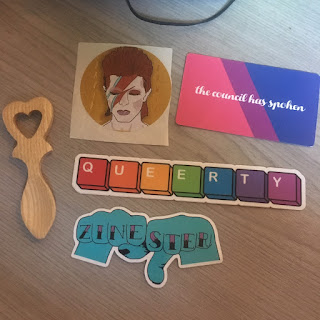 Thirdly these gifts were all from Janet's thrifty swap, the sender did so well! I haven't heard of the book Jake + Lily, but it sounds really adorable and I'm looking forward to reading it. The bullet journal notebook is really practical, I will definitely get to use it in 2019. The face masks and foot masks are great, I will definitely get use of these. I put the pen in my handbag! 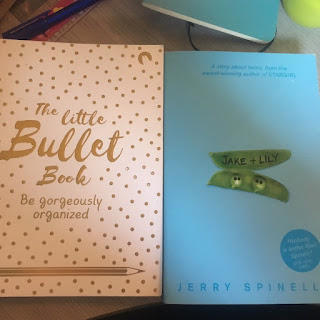 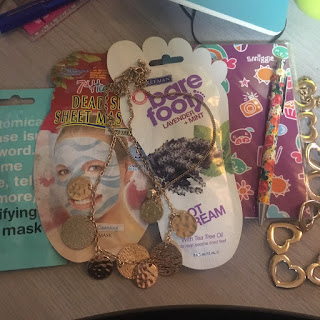