Hello! Happy new year! I'm writing this in December but by the time you read it, it'll be 2019! Isn't that weird? That's so far into the future I barely know what to do about it. Wasn't it 2002 just yesterday?

This year I had seen the Yankee calendars, but they stayed pricey and I couldn't justify one, especially as I'd recently bought some lots of their candles off Groupon for bargain prices, so I decided to not buy one. Then I saw a Staylite calendar advertised for £5, so I bought one for me and one for my mum.

The candles don't have as much of a scent throw as Yankee ones, so I've taken to burning two at once - sometimes the same scent but sometimes complimentary ones. This is fine because I missed a few days. I gave my mum the calendar when she'd had a really rubbish week and it really cheered her up which I'm glad about. For £5 you can't complain, I would buy this again next year. 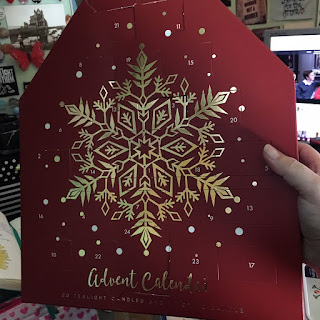 I'd seen the Lindt advent calendars online somewhere. I love Lindt chocolate, so I thought Lee and I would go to the Lindt shop in York's designer outlet when we were there at the end of November. However, when we went, the queue was ridiculous just to get to the car park! So we decided to just come home instead, and Lee said he'd order one for me. There were quite a few to choose from, but I chose this one because it had most of the sweets I like. I enjoyed this advent calendar a lot.

I bought Lee a Quality Street one for a fiver, which he liked. 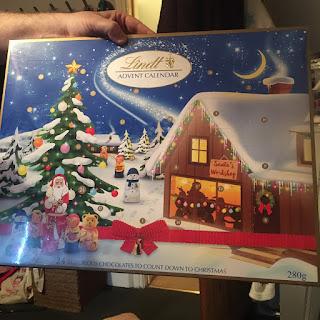 A finally I got this advent calendar as a surprise from my aunt! She bought the boxes plain (from Hobbycraft I believe) and decoupaged them. They're really tiny so she had to be really creative for what went in them, and as you can see she bought me some things that wouldn't fit inside. She had asked Lee and a friend for some ideas, and I am thoroughly enjoying opening each little door and seeing what's inside. I've had stamps, hair clips, a candle, an amethyst crystal... so many lovely little things! 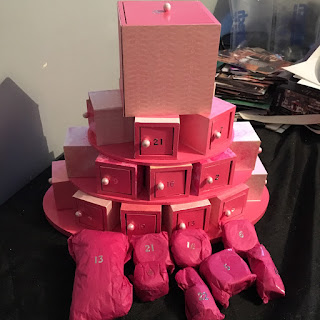 I've told Lee that he needs to fill this for me next year!
Posted by Rebecca at Tuesday, January 01, 2019