I started a sort of bullet journal last year. I don't do the "official" style, but I keep lists of stuff and do some journalling about holidays and stuff in there. I had tried different notebooks but I find the Leuchtterm 1917 in a dotted style the best because the dots are really easy to draw grids in and stuff. I asked for a new one in grey for Christmas, which I'm putting a bunch of stuff into for 2019. My other one was only about half full but I wanted a new one for the new year! It was a gorgeous emerald colour, but I'm enjoying the grey one too.

Anyway, I started making a list in October of things I wanted to do before Christmas, all the festive traditions that I like. I've found lists like these really help me get things I want to do done, and I've found that they help Lee and I find fun things to do together. I wrote down things I had to do and things that I knew I would find fun, and things that I knew would feel satisfying to tick off (like "buy all presents").

Lee and I also have a tradition of watching loads of Christmas specials of our favourite TV shows, so I added some to my list that Lee doesn't watch, like the Gavin and Stacey one. I also had rewatched a load of Royle Family so I knew there was a few of those Christmas specials to watch, and as it turned out there were like three that I hadn't seen, so that was nice!

Anyway one of the things we'd done in 2017 which I'd liked was going to Costa to try their festive drinks, so I added that to the list and told Lee we would definitely go to try some before Christmas. As it was, we didn't have time until the 22nd of December, but on that Saturday morning we popped into town and into Costa.

I had the caramelised orange hot chocolate and Lee had the Luxury hot chocolate which was incredibly thick sweet hot chocolate like you'd get in Italy or something. They were both nice, we decided. We had lunch too and then went to Lidl for some last minute bits. 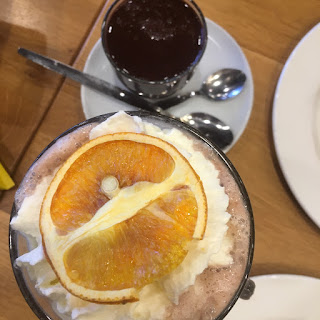 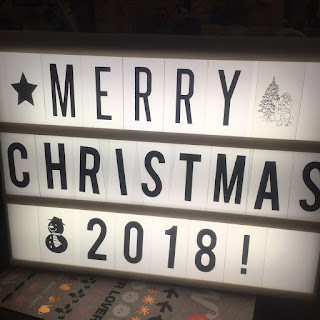 I remembered I had new letters for this, including these Christmas ones, isn't the snowman cute? 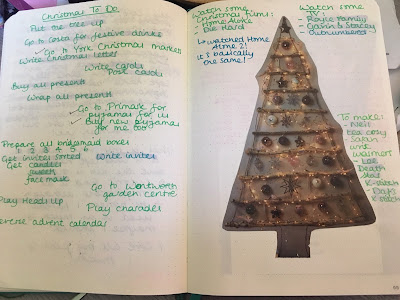 Here's the list I made! We didn't get to Wentworth Garden Centre but there's always next Christmas!