Lunch with a Friend

At the beginning of March I headed down to London one weekend to see an exhibition on the Sunday. I'll post about that in my next post, but on the Saturday I set off quite early and drove to Watford to meet my friend Michelle. She lives in south London and we had planned to meet elsewhere, but then it turned out there was a rugby match on at Twickenham so we decided to meet further north. We met at the station and I set off driving down a road that had tons of restaurants on it, but parking there needed cash and neither of us had any. So we ended up at Pizza Hut! It was funny really because when we were at 6th form college together - where we met - we and our other friends would often go to Pizza Hut or Frankie & Bennys or somewhere else terrible on a retail park. It was like being eighteen again.

We had food and chatted for ages. It wasn't very busy so no one was hurrying us out of these, which was nice. I haven't seen Michelle in over a year and we definitely don't spend enough time together, so it was nice to catch up. A couple of days later she sent a message to our group chat saying that she is having a baby and had just had her first scan. I'll have to start thinking about making a baby blanket!

After we had had lunch, I took Michelle back to the station and then headed round to Woking, where my aunt and uncle live and where I was staying over. We had some food together and then I did some crochet and hung out with their cats, Max and Charlie.

I only took a few photos but here we go: 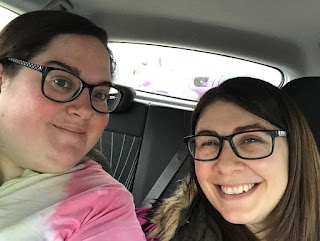 Me and Michelle in the car as we said goodbye 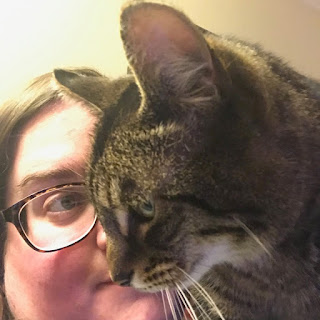 I was sitting in Max's place so he sat on me 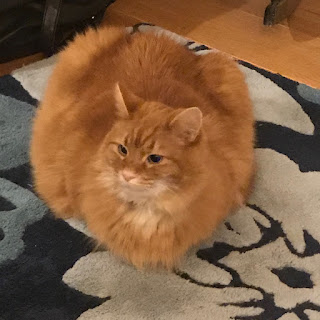 Charlie is huge, and floofy, and orange, he is great 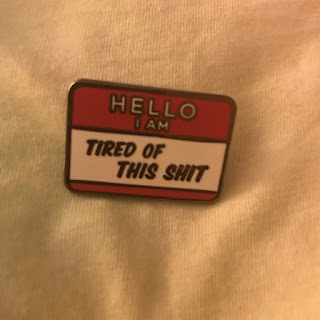 And finally, here's the pin badge I was wearing, it's so cute and funny