At the beginning of March I went to Leeds Grand Theatre to see Cabaret with Sam and Jodie. I love the film but had never seen the stage show, so when I saw it was touring I wanted to go. We met at Leeds Grand about 7pm and went inside. We were on nearly the back row of the stalls, but you still get a decent view in the Grand. We were right on the end but could still see the whole stage.

The play is really different to the film, I was surprised actually. It's really good, and it ended in a really powerful way where the Kabaret dancers got sent to a concentration camp. The whole theatre was quite shocked and there was a long silence before people started to clap. It was very well done, very sensitively done, and felt like a timely reminder of what the Nazis did to queer people.

When it had ended I went out to the foyer and then realised I needed to go to the loo before I went home. I needed an accessible loo so asked where one was. The one I was directed to, at the right of the foyer, was undergoing a refurbishment and was closed. I asked another member of staff and was directed upstairs so that I didn't go back into the theatre against the flow of traffic. I went in the lift, and upstairs a member of staff shouted at me for coming back upstairs when she was trying to empty the place! I mean that's fair enough but I didn't deserve her shouting at me. There was someone in the disabled loo and by now I was a bit desperate, so I went into the ordinary ladies loos. This member of staff then followed me in to the loos to wait for me. Talk about being hounded! It was unpleasant when I was only doing what I had been told to do.

But the play was excellent and the music sounded great, which is the main thing. 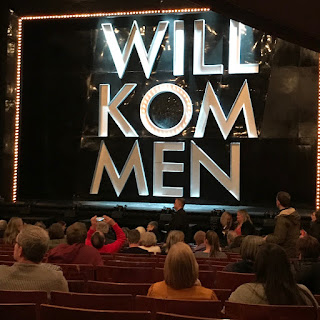