What I Wore 14th March

I had a new dress to wear when we went out to Sowerby Bridge. I kept seeing an advert for this black pinafore dress on Instagram so went on to the Simply Be website as I really liked it. It turned out to be in the sale so was less than £15! I needed a new black top (my old one had some holes on it) so I ordered a multipack and the dress, and also the same pinafore dress but in a green leopard print.

The tops were fine so I kept them, and the black dress I thought looked great on me. The green dress was nice, but a slightly different fabric to the black one which meant it sat shorter on me and I didn't like it. But that's fine, I'm glad I tried it!

The black dress is really nice. It sits really nicely above my knee and it has nice deep pockets. I like the pinafore top; it's not too baggy on my shoulders which I was a bit worried about. I don't wear a lot of black but I like the look on me. I put my rainbow tie dyed top on underneath and leggings, and my boots. I really liked the whole outfit and will wear it again!

I had also painted my nails. I've been trying to do it every week. I go through phases where I wear nail polish a lot and I've been trying to keep up to it. I discovered Nail Polish Direct and bought a few new polishes - two holos, one from Barry M and this one from A England, and twelve China Glaze minis from two different collections. All for the bargain price of £26! I'll use some of the minis over the next few weeks, but I couldn't resist using this A England polish straight away.

It's called Dancing with Nureyev and it's a gorgeous blue with a deep holographic flash to it. It looks absolutely amazing in bright sunshine. I love holographic nail polishes anyway and this is definitely one of the best I've seen. I have two other A England polishes that I've never worn but I'll have to because their formula is really good and my nails dried really quickly. 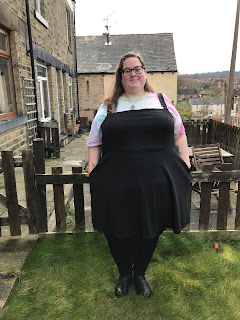 Simply Be black pinafore dress with hand dyed top underneath 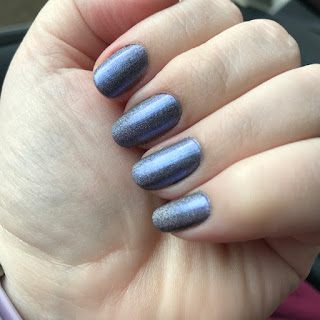 A England Dancing with Nureyev polish

Email ThisBlogThis!Share to TwitterShare to FacebookShare to Pinterest
Labels: simply be