Drive in Cinema in Bradford

In the middle of the month Lee and I went to a drive in cinema in Bradford, at the Bradford Bulls stadium. We had bought tickets to see Joker back in November, but then the second lockdown happened so it got cancelled. It was rescheduled for early December, but it was on at 9pm on a Sunday, which wasn't too useful for getting home from Bradford and going to bed ready to get up to work the next day! The company offered us the chance to change the tickets to a Christmas film, however, so we decided to see Miracle on 34th Street at 6pm on a Thursday, which was much more sensible.

We decided to set off early and get food from Manjit's Kitchen in Leeds. I've been hearing so much about it, and I bought Lee a gift card for it back on our wedding anniversary in June. We've been meaning to use it ever since, but obviously the pandemic and lockdown has put paid to that. So this seemed ideal. We ordered online and picked the food up at just past 5pm. Their menu is all vegetarian, and it's somewhat of a limited menu currently, but there was still enough for us both to choose tons of food.

We made our way to Bradford and had to queue for a little bit to get into the stadium car park, but it was all very well organised. We were given a speaker which we put on the dashboard. The film started about 6.30 and the speaker was brilliant. There were four different screens and we were shown to our parking space, which was at the back, but there were only about three cars in front of us, and we pulled far enough back so that we didn't have to look at the top of anyone else's car. The staff were really useful.

We got the food out and started eating. Lee had spicy potatoed and a bhaji in a beetroot bun that he said were really nice, although I didn't taste either. We had some onion bhajis to share. I got a tallit, which was a few little bits all at once. I got like a falafel in a korma kind of sauce, some daal, some rice, a potato samosa, and a lovely crunchy coleslaw. Oh, we got a paratha too I think.

As we were eating a member of staff came round to check our tickets. She put a plate on our car which said a number on it, in case we wanted to order food or drinks. You could do that online, and the adverts before the film said that there were vegetarian and vegan options available, so I might do that in the future. There were tons of drinks, including festive ones and alcoholic ones. The food truck was to our left and was certainly kept busy with staff popping backwards and forwards. And behind the food truck was a portable loo block, which was excellent obviously, and good if you've got kids.

We didn't eat all our food so brought it home to eat the day after. Ideal for what we spent! I enjoyed the film, I think I have seen it before (it was the 1994 remake) but I didn't remember most of it. It finished around 8.15 and although we had to queue a bit to get out of the car park and give the speaker back, we were soon on our way home. It was a really fun experience and one I would recommend if there's one near you any time soon! It was the first time we had been out of the house in over two months really, so it was just so nice to be out and about. Out in the wooooooooorld.

I had put on a new top to go out. I got this recently from Simply Be - I did a huge order which included some Christmas gifts and some festive clothes for me. I liked this t-shirt that says "Express your elf!" It's in nice gold foiling and the quality of the top feels really high. I put it on with one of my favourite skirts.

I put a wrap on to travel and to sit in the car in, and I was plenty warm enough even though we had the car switched off most of the time. Lee found our snowman hats from a couple of years ago, so I put that on too which helped with the warmth. But I would recommend packing a duvet or blanket if you think you might feel the cold in your car. 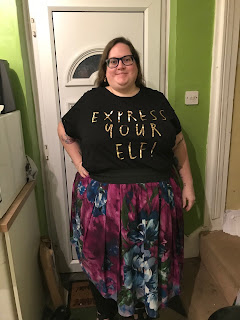 Festive t-shirt from Simply Be and Scarlett & Jo skirt 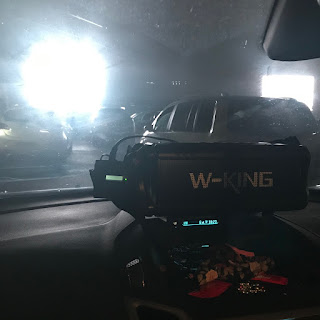 The speaker in our car. The bright things outside are the screens 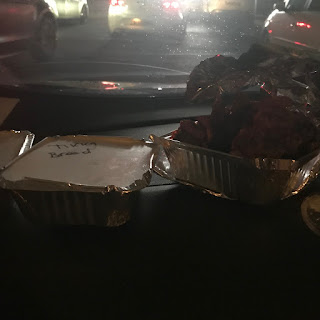 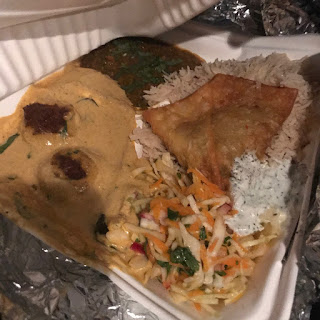 My tallit, it was all delicious 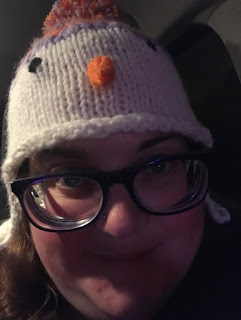 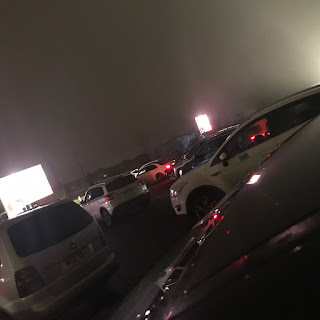 Looking across the car park
Posted by Rebecca at Saturday, December 26, 2020

Email ThisBlogThis!Share to TwitterShare to FacebookShare to Pinterest
Labels: cinema, scarlett and jo, simply be