What I Wore November 5th

I haven't bought many clothes this year because, you know, we've not had many places to go. I've mostly worn pyjamas and a soft bra and a cosy top, which is what I usually wear at home because my chronic pain means that's most comfortable for me to do.

But I saw someone of Facebook had bought a couple of dresses from Carolina Dress Room so I went to look. The prints and patterns available are amazing! There's so many and they're so fun. I could have spent a ton of money, but I decided to just start off with one dress, because I didn't know how they would fit.

The sizing is, on the bigger side, rated at sizes 22-30. That's a big spectrum, and as you'll know I'm on the upper end of that spectrum. The website says the dresses are super stretchy, so I decided to give one a go to see sizing. I went for the rainbow pattern because I love a rainbow, and it is so much fun.

It arrived very quickly. I had to pop out to do some deliveries so I put it on. It does fit me. The material is very soft, it almost has the feel of suede to it, and it's very stretchy. I had to pull down the waistband a little bit, but once I did it stayed where it should be. The only part that felt tight was the cuff of the arms, but I do have very fat arms so I'm quite sure this wouldn't be a problem for most people. And it wasn't too tight to be comfortable, so they're fine.

The dress also has pockets! And it was well warm enough for me even in early November. I set out, and got three compliments from people as I saw them, including a complete stranger who wanted to know where I'd bought it. I got back and got Lee to take this picture, which I then uploaded to Facebook. I got a TON of likes and comments on it, and a few people said they were also going to buy the dress or one similar. It was £34 I think, so not super cheap, but definitely cheap enough for such a cute dress.

I really want a couple more now, including one with CATS on. The sizing works for me even at the upper end of the spectrum so I think it would work for a looooot of people too. The fit and flare is really cute too. 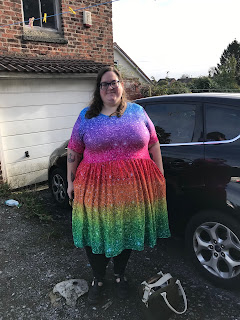