What I Wore November 16th

Wait, you're thinking, I just saw that dress in your last post, Rebecca! I've seen this already! And yes, you have, but I'm not showing you the dress today! Instead I'm showing you the footless tights!

I got the dress from Carolina Dress Room, as I said in my last post. I posted that last picture on Facebook and a bunch of people really liked it and went to order their own dresses from there. I've heard that some stuff, including the rainbow dress, went out of stock, and I've also heard that Carolina Dress Room refunded one payment without emailing the buyer to say why they'd done that. I think that's pretty bad customer service, especially as my friend may have chosen a different dress instead and probably would have spent more with them in the future. I understand they're a small operation, but my friend actually reached out and asked why she had been refunded, and said she would have appreciated an email. She STILL didn't hear anything back. It's a way to lose customers for sure, and it's put me off a bit if I'm honest. It's not the way to run a small business!

So what I'm really showing you here is the footless tights. The phrase 'footless tights' takes me right back to PE class at high school. For 'Games' we were usually outside and wore tracksuit bottoms, but for 'PE' and dance class we wore pale blue airtex blouses and navy footless tights. Shudder. I haven't worn any since then! But I've obviously tried Snag Tights before and know that they fit me. Back in March, in order to keep the business going through lockdown, they did an offer where you could buy vouchers to spend in November - whatever you spent they doubled, meaning you could get £20 worth of tights for £10, and so on. So I bought around £13 worth of vouchers and I also bought a few pairs of tights then, which I haven't yet had chance to wear. But when I do, I'll share them!

So November rolled around and I got my vouchers through for more tights. As well as, I think, around half of my Facebook and Twitter friends! I think we'd all bought some vouchers back in March! My feeds were full of babes receiving packages of colourful tights in the post! I went on the website and got five pairs of tights - two normal, two footless, and a pair of fishnets! They arrived really quickly afterwards and when I had to go out a couple of days later I decided to put my rainbow dress on and these footless tights in 'Mosaic'. They're a gorgeous bright turquoise colour and flow seamlessly into the dress.

I was still a bit apprehensive about them, and they do bunch around my ankles a bit. But I could pull them further down over the heels of my feet, which I may do, and they look fine so I'm not too worried! I love them! 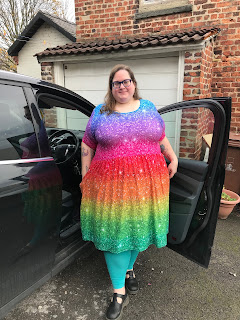