Tea Out at Make No Bones

At the end of July I met up with my friend Philippa in Sheffield. I haven't seen her since before the pandemic started, so it was well overdue and so nice to see her. I had been having a craving for vegan junk food, so I suggested we went to Make No Bones. It used to be down in Meersbrook, and then it moved to Church - Temple of Fun. Pippa and I went to it there once, but I don't think I blogged it. It's now moved again to The Old Workshop in Neepsend, so Pippa booked a table. We usually meet for lunch but Make No Bones doesn't open until 4pm at the moment, so we booked for then for an early tea. It worked out well for me because Lee was going to band practice and needed the car at 6.30 ish.
I had been craving a chicken burger - it's hard to replicate the mouth feel of fried chicken in fake meat products, I've found - so I went for the "chicken" burger which comes with vegan slaw and mustard and salad. It was so good - it had that crunch of fried chicken and the flavours were gorgeous. I also went for poutine fries which had fake bacon bits and vegan cheese on them, and came with a side of gravy to pour on. Finally I went for avocado wings which are deep fried and covered in ranch dressing and which I've had before and would recommend. The food was all great - Pippa went for the same as me except she had mushrooms instead of avocado wings.
It was nice to go out again, and great to have such amazing food! 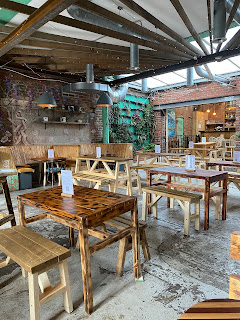 It's a nice big airy space 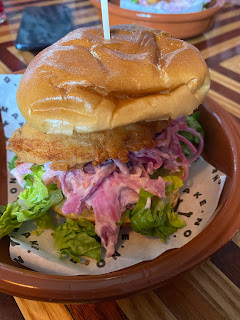 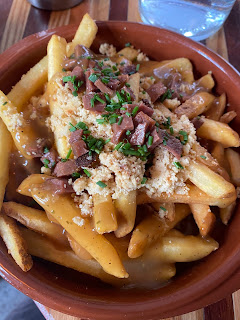 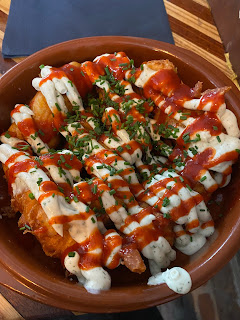 Email ThisBlogThis!Share to TwitterShare to FacebookShare to Pinterest
Labels: sheffield