Two Trips out in July

Towards the end of July I made plans to meet up with my friend Sarah. We always used to like going to Yo Sushi in Meadowhall, but since Covid it's not been open in the same way, and Sarah had been to Meadowhall before restrictions lifted and said no one was wearing masks or keeping their distance then, so we decided we would try another sushi place in the middle of Sheffield. We had decided on one but then it turned out it didn't open until 4pm so FINALLY we decided on Mr Myagi's Revolving Sushi Restaurant on Division Street. I booked a table but I needn't have bothered, although it isn't huge inside and would be busy later on I bet. I know there's parking just off Division Street and I managed to get it which was good. There's usually some on Division Street but they've pedestrianised some of it so that restaurants can have outside spaces, which is annoying, but I'm glad I got parked all the same. Also, the city was setting up for Tramlines festival so roads off Division Street were closed... but it was all okay.
I was impressed with the size of the restaurant's vegetarian and vegan selection - there's LOADS. They have excellent sushi choices and fake meat dishes, so I went for Korean BBQ mock popcorn chicken which was delicious and sticky and amazing. Sarah went for pulled beef bao buns, I think, which were bigger than we were expecting! We shared a veggie sushi platter which was yummy. I was so happy they had marble soda, too, as I really like it. I got lychee flavour which was really nice.
We had considered ordering more sushi but there's a dessert place across the road so we went there. We had a chocolate shot each and a dessert. I had a crepe, it was pretty nice. Baby Robyn was very good throughout the whole thing and we had a good cuddle and look at her book. 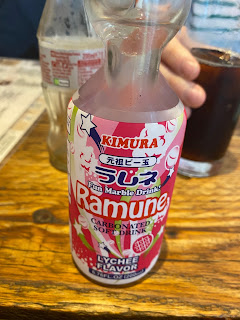 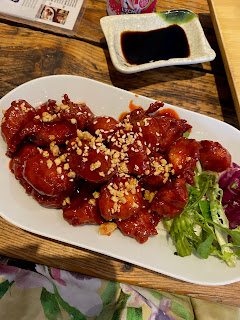 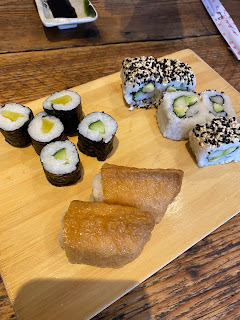 This sushi platter was so nice, I could've eaten it all myself 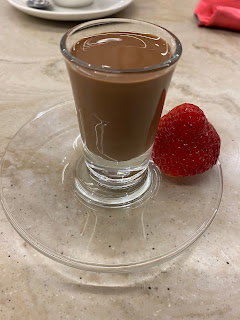 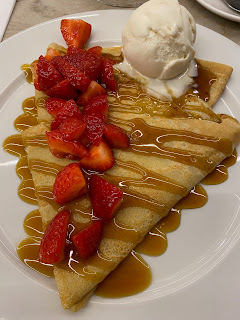 And my crepe!
The day after this, Lee and I went to Manchester to a Publisher's Fair held in the Central Library. We had breakfast sandwiches and then set off, as I'd bought tickets to go in between 12.30 and 12.50 - they had it staggered which worked out well. There weren't tons of stalls, but I bought some books, and my friend Vicky of Pen Fight Distro was there with books and zines so I bought some of each of those from her. We were done quite quickly so we had a drink there and then wondered what to do next. We went down to Revolucion de Cuba where we got some bar seats with a proper seat which is good for me, it's not painful. I had a Flamingo Collins cocktail which was delicious and came in the most amazing flamingo mug.
Then we tried to find food to eat... and failed. NOWHERE was serving food, because they were all just operating as bars. There was a Polish restaurant with no veggie choices, and somewhere else with ONE vegan choice... which I did not want! I wanted vegetarian food! We walked round and round and it was hot and tiring and eventually I just said let's go home. It was frustrating.
On the way home we decided to go to Glossop as there are pubs and stuff there. I had it in my mind there was a Pizza Express and I think there used to be, but it's gone now. But there is a Pico Lounge - I don't know if you've been in any of The Lounges but I think they're franchised. I've been in ones in Swansea and near us at Fox Valley. I know they have decent veggie choices so we went in there. I had tapas and a Long Island Spiced Tea which was lovely. Lee had a huge buttermilk chicken burger which he really liked. It was past 4pm by this point and we were both hungry and tired, but I'm glad we finally managed to get something. It was a nice day but I paid for it the next day and was in a lot of pain. 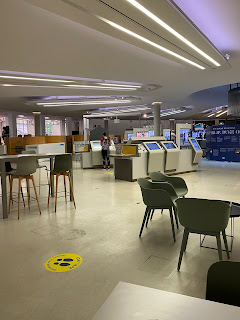 In Central Library having a drink 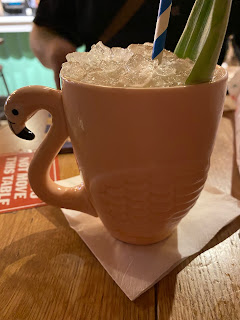 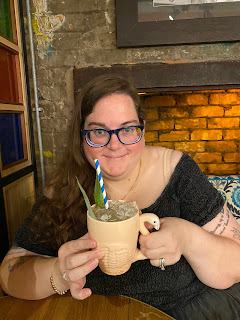 Lee's finally cottoned on that I always need a photo of myself with a fancy drink. I was wearing this bardot neck Yours dress and there was a girl in the place wearing a really similar dress only it was longer and had broderie anglaise in it - it was so pretty and I told her she looked really pretty 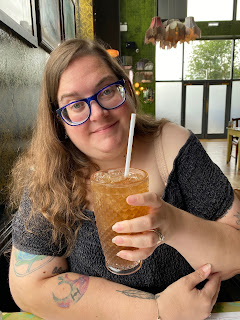