On the 31st of July our friends Lou and Si came over to hang out with us and see the kittens, who they last saw in September 2020 when they were only a few months old. We ordered pizza from Papa Johns as we had a voucher which gave us 50% off. We had a vegan pizza, a veggie pizza, and a chicken pizza, to get everyone's needs catered for, and a bunch of sides. I don't LOVE Papa Johns pizza, but it was okay - the veggie pizza was nice. Lou and Si brought some vegan cakes from near their house, which were lovely.

In the morning, Lee and I had been to the gym. I'm not sure if I mentioned it, but I set myself a challenge to swim 2.5 miles in July. This was 202 lengths. We usually go swimming only once a week, and I'd say we only do around 20 lengths each time, so obviously that's only around 80 a month. So doing more than twice that would be a proper challenge for me. I decided to ask for sponsorship and wanted to raise money for Mind as mental health issues are close to my heart, so they're a charity I like to support.

I knew it would stretch me, and challenge me. I did lengths with my mum and with Lee. When it was really hot Lee and I went a few times to cool down, so didn't do loads of lengths then, but everything was a little more towards the total. On the 26th of July my mum and Lee and I did enough lengths so that I only had ten left to do!

I went to the gym a couple of times by myself, which is not something I do often, but when I did I managed to do thirtty lengths all at once. I paid for it with pain the next day though, when I could barely walk because I was hurting so much. I'm sure most people could do way more lengths than me, but due to chronic pain I've to be careful. But it was a challenge for me!

Anyway, before Lou and Si arrived, Lee and I went to the gym and did the final ten lengths and then eight more, meaning I had a total of 210 for the month! I'm so pleased. I also raised over £500 for Mind, which is absolutely brilliant. I had so many brilliant donations and I'm so pleased I did it. And proud of myself!

We will definitely try to go to the gym more often I think, and I really should get better at going by myself. I'll try to keep a tally of how many lengths I do next month and see whether I could get to 150, for instance.

After the gym we came home and I got in the shower. Lou and Si arrived and so did the pizzas and it was really nice to just chill!

I was wearing this t-shirt from Simply Be with sequinned lips on it, I haven't worn it in ages but I like it, and a black pleated skirt that I think is from New Look. I got it at a clothes swap though - remember them! Hopefully we'll be able to have one again soon. 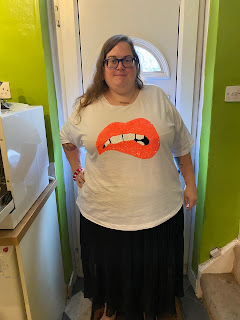 Email ThisBlogThis!Share to TwitterShare to FacebookShare to Pinterest
Labels: new look, simply be