Two Lunches Out at the Beginning of August

I had a really busy week at the beginning of August which left me exhausted but which was very fun at the time. I guess I was seeing people again after so long, which was lovely, but it meant a lot of time out!
At the weekend my friend Lucinda asked if I wanted to meet her in Scarborough, where she was on holiday with her partner. But Scarborough is a long way for me to drive by myself there and back in one day, so we thought about it a bit more and then decided to meet in York. I know York well so we found somewhere with vegan options and I parked by my university. I went to York St John for my undergraduate degree when it was still a college of the University of Leeds (that's where my degree comes from) but now it's a university all of its own. I loved it, it was so nice living in York and I miss it! So it was nice to park at the bottom of Gillygate and walk up to where I'd arranged to meet Lucinda and Linden.
I had a vegan hotdog and chips, and chocolate orange cake. Lucinda and Linden both had veggie burgers. It was nice to meet Linden, we had good chat, and it was lovely to see Lucinda after so long again. I last saw her on my birthday in January 2020!
The next day, Wednesday, I went to Sheffield to meet up with Laura of Lolly Likes and her Franklin. I've seen her a couple of times during the pandemic but not for lunch and not for long. I'd been fancying trying something new in the middle of Sheffield, so we went to Pho, which is a Vietnamese restaurant. I had a bit of a kerfuffle getting there as the car park I was going to use was closed - helpful! - but I found street parking and walked through. Laura and Franklin were sitting outside - it was bouncing it down with rain in Barnsley but bright sunshine in Sheffield! It was lovely.
Laura and I bought got summer rolls with peanut sauce which were SO good, and then I had mock chicken Vietnamese curry and Laura had some kind of noodle soup. My curry was so nice - beautifully spiced and with a thick sauce. I will definitely go back there because it was such nice food.
I don't have any photos of meeting up with Lucinda, but here's the Vietnamese food: 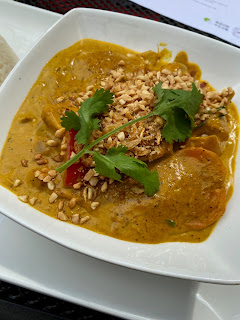 Curry, it had rice on the side 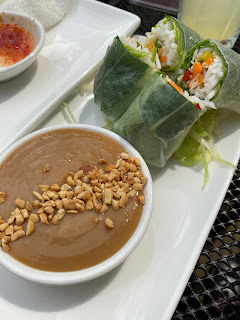 Summer rolls with peanut sauce, which were vegan 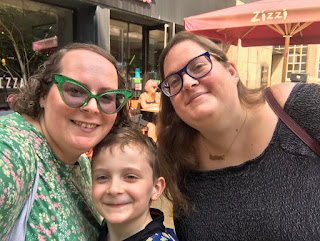 Laura snapped this gorgeous photo of the three of us as we were leaving, I love it! I made it my profile picture on Facebook :)
Posted by Rebecca at Thursday, September 23, 2021

Email ThisBlogThis!Share to TwitterShare to FacebookShare to Pinterest
Labels: lunch