ALSO at the beginning of August Lee and I went to Ringwood Hall Spa near Chesterfield for a twilight spa experience. Lee's discovered he likes spas, so I thought we should treat ourselves and found they did a twilight package which included a pizza and glass of prosecco each first. I've been before with Sam and Jac so I knew what to expect, but Lee didn't, and didn't want to be spoiled so I didn't say much!
We arrived just before 5pm and had pizzas and drinks in the Glass House restaurant. It was nice - my pizza was lovely and the prosecco was lovely and cold. We went across to the spa at around 5.50 and there was a bit of confusion which was annoying, but we managed to get in.
As I said in my last post about Ringwood Hall spa, there's a pool that's about 8 metres long. It has a jacuzzi at one end, massage jets in the middle and an infinity side, and massage seats at the other end. It also has two saunas, a steam room, a cold/warm shower experience, ice, some relaxation rooms, and sun loungers. There were ten of us in in the evening which was just the right number I think. We stayed around the pool area - I went in the sauna but Lee's not keen on hot rooms, and the steam room was broken which was a shame.
The water temperature was really hot so we made sure to keep having a cool shower and to drink lots of water. I went a bit funny at one point - I think my blood pressure had dipped too low and I felt a bit ill - so we sat on the side for a bit until I felt better. But it was lovely to float and sit in all the jacuzzi bits - my joints felt really relaxed and not in pain!
Lee enjoyed it too, he's got vertigo at the moment so had to be careful too but he did like it. I would go again for sure, but there's a few other spas I've got my eyes on! 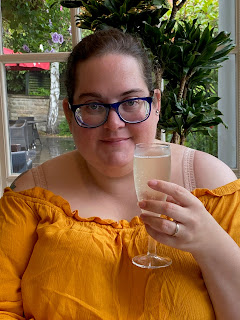 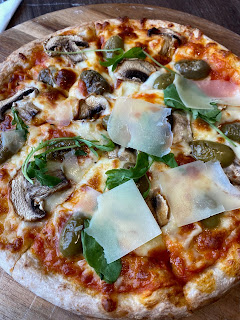 I had olives and mushrooms on my pizza, it was lovely 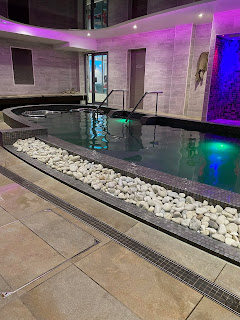 The left of the pool from where I was sitting.... 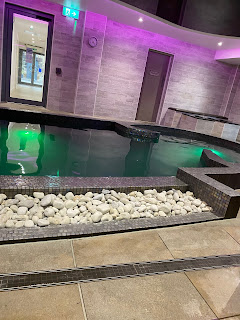 And the right. As you can see, it isn't huge, but people move around 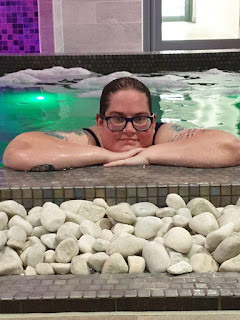 I like this photo I just wish I was smiling more! 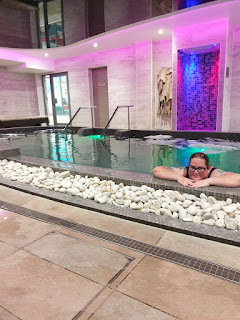 This is better! As you can see at this point I had the pool to myself
Posted by Rebecca at Sunday, September 26, 2021

Email ThisBlogThis!Share to TwitterShare to FacebookShare to Pinterest
Labels: spa