My friend Jacqui was forty last September and wanted a bunch of her friends to go away with her, but thanks to Covid it had to be cancelled, so we rescheduled for this year. Thankfully everyone tested negative so we were able to go. There was me, Sam, Jac, Hilary and Dani. Hilary is Jac's housemate, and Dani is Jac's friend from South Wales; I've not met her before. Jacqui had chosen an old manor house near Accrington to go to - it had six bedrooms and five bathrooms so everyone was able to have a bedroom and a bathroom each. I snagged the downstairs bedroom which was far better for me.

We couldn't check in until 5pm so I made plans to pick Sam up at 3pm. Jacqui and Hilary came to mine to put some stuff in my car because they had to pick Dani up and just didn't have room. Fortunately my car had plenty of space! Lee and I went to the pub for some lunch and then I set off for Sam's. We popped into Sainsbury's on the way, and reached the manor house at just after 5pm.

It was huge! At one end was a huge, well equipped kitchen, with a big dining table. My bedroom and bathroom were next, and then two living rooms, a big hallway, a games room with snooker table, and a conservatory. Upstairs were five bedrooms, three ensuite and two sharing a bathroom. Then outside there was a hot tub and I had made sure to take my swimming costume!

We unpacked everything - the fridge was very full with alcohol - and then I made fajitas for tea. Sam helped; she cut up the chicken for me because since going veggie I'm a bit squeamish about that. I had halloumi fajitas which were so good. There was a big range cooker but we didn't get that going, so there was an induction hob to use which took us a minute to work out.

After tea we just sat around chatting which was nice! I was wearing this lips t-shirt from Simply Be forever ago, and a new skirt from Carolina Dress Room. I bought it cheap in a lucky dip and when it arrived it was a Size 3 not a Size 4. It fits me, but I was a bit unsure about the length... But decided to wear it anyway. And I think it looks fine so I just need to get over it! I like the pattern on it, it's cute. 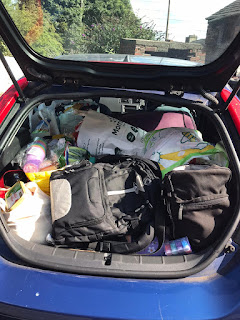 This picture proves just how full Lee's car was! 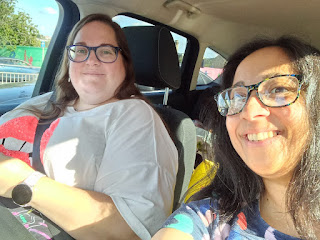 Me and Sam on our way! 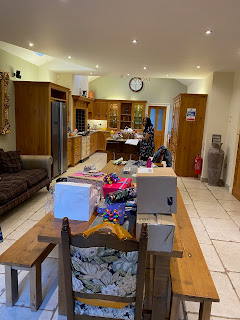 The huge dining room and kitchen 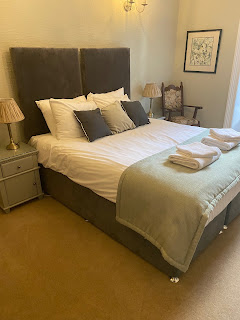 My bedroom, the window looked out on to the hot tub 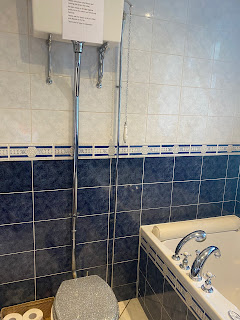 My bathroom with jacuzzi bath 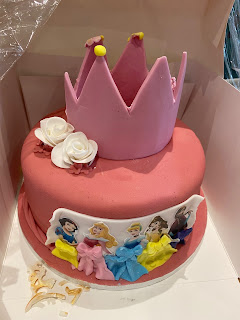 I ordered Jac a cake and despite being really careful with it in the car, it didn't survive the journey intact. But it still looked cute and it tasted good! 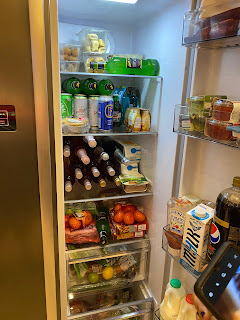 The fridge - I must point out that the lager was there when we arrived, but yes that was a lot of bottles of wine... 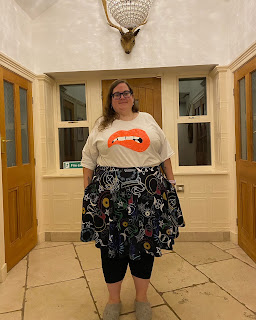 And finally my outfit!
Posted by Rebecca at Monday, November 22, 2021