What I Wore February 19th

On Saturday the 19th of February Lee and I went out to meet some friends of ours who were down from Gateshead. Paul has been friends with Lee since before I even met Lee, and Liane is his wife. They got married in 2017 when we had that very busy year of weddings! We haven't seen them since Christmas 2019 because of Covid, so when Paul messaged me to say they were coming down to Yorkshire and wanted to meet up, I said yes immediately of course.
Lee and I had a pretty laidback day before we went out. He had caught some kind of bug (not Covid) and it was wiping him out. He's had vertigo since June 2021 and it seems like whatever virus he caught was made worse by the vertigo. He's waiting for a referral to the clinic so hopefully that will help. Anyway we had a lazy day and then set off just before 5 to Wakefield to pick Paul and Liane up.
They're both vegan so I had sent them a list of vegan options in and around Wakefield, and they chose The Spiced Mango in Middlestown. It's an Indian restaurant and I have been before - we went with my mum and stepdad one time on my stepdad's birthday, but it's absolutely years ago and I've been wanting to go back for a while. So we were pleased they had chosen that! We booked for 5.30 as afterwards we were going to go to my mum's to see them.
We had poppadums and pickle tray, which is always nice, and then I had bhel-puri to start with, which was lovely but VERY spicy. It was crunchy and delicious though. Then I went for aloo paneer - I love paneer so this was ideal for me! Lee and I shared some rice. Paul and Liane really enjoyed the food - there were quite a few vegan choices - so it was a good choice all round! I'll definitely go back in less time!
I pulled out a pair of Snag tights, obviously, because they're my new thing. I have two pairs in Bubblegum, and I thought one was tights and one footless tights, but on inspection they're both footless pairs! So I'll probably sell one pair... to buy more, obviously! I love the bright pink colour and the footless tights are really easy to wear and don't bag at all. I thought this skirt - which was a dress, but the bodice didn't fit properly, so I just cut it off and wear the bottom as a skirt - matched perfectly with the shades of pink, so I then just found a plain black t-shirt to put with the skirt and bright tights. It was a nice outfit!
After food we went to my mum's, where my aunt and uncle were staying. My grandma has recently gone into a home, so my mum and aunt were starting to sort out her house with her. It was nice to see my aunt and uncle too. We stayed ages, it was gone midnight by the time we left and took Paul and Liane back to their hotel! It was such a lovely evening. 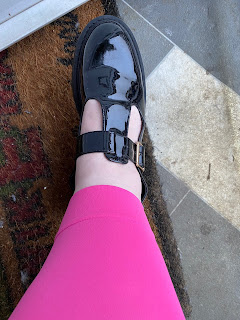 Bubblegum Snag fottless tights and patent Schuh dolly shoes - these shoes are so comfortable and also look so cute! 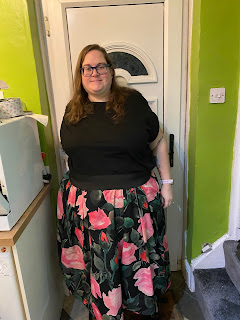 Scarlett & Jo "skirt", black t-shirt from Simply Be. I also had my hair cut the day before this - she gave it a really good trim and I liked it!
Posted by Rebecca at Thursday, April 07, 2022