Museum of the Moon at Wentworth Woodhouse

In the middle of March Lee and I went to Wentworth Woodhouse just south of Barnsley to see Museum of the Moon, which is a huge model of the moon. I saw Gaia (a huge model of the earth) last year at Wakefield Cathedral, so I wanted to see the moon one too. It was on at Lincoln Cathedral but we didn't make it there. It was only on at Wentworth for a week, so we managed to squeeze it in even though we had a busy week AND I wasn't very well after I'd had to see the gynaecologist yet again. But I was so glad we bothered to do it because it was spectacular.

Lee had band bractice, so we went in separate cars to Wentworth. I've never actually been to the house - I've been to the garden centre a bunch of times, but not to the house. I've heard of it, and I even have a book about the coal mining that happened on site, called Black Diamonds, though I've never read it (maybe I should!). So I was excited to see the house too. We parked in the car park and then I was happy to see they have an accessibility golf buggy to take you to the front porch. It's quite a long way and I would have struggled, so the buggy is ideal. We got in then joined the queue at the front door, which didn't take long to get us in.

So as well as the Moon there were several other art installations and they started in the downstairs rooms. There was a video of poet Helen Mort (who I've heard speak before) reading a poem, and in the chapel there was a very cool sculpture. We sat in there for a while.

The Moon itself is upstairs and there's no lift, but I did manage the wide, shallow steps okay. The room where the moon is was apparently used as a ballroom in the Downton Abbey film, so that was pretty cool to see. The moon is huge - 7 metres across - and there are cushions underneath it so you're encouraged to lie down. We did. The moon moves slightly because of air currents in the room. It's so cool to see! We laid there for a while, then walked around the whole moon. I took lots of photos! We looked at other artworks upstairs, including a wind chime kind of thing which was powered by fans. It was really good, I liked it.

We were in there about an hour all told, and we could have spent longer but Lee had to get to band practice. As we were driving out I noticed the house was lit up in the colours of the Ukrainian flag, which was really lovely. I'm so glad we bothered to go and I would recommend it if the Museum of the Moon is coming near you any time soon! 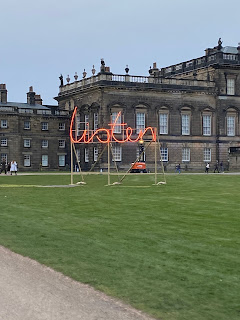 Neon art on the drive 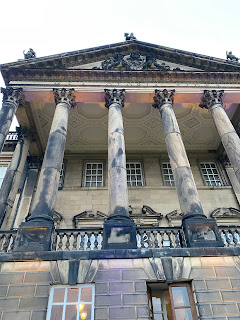 The stunning front facade of the house. This is what the ballroom leads on to 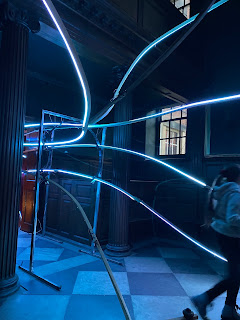 In the chapel, we both liked this a lot 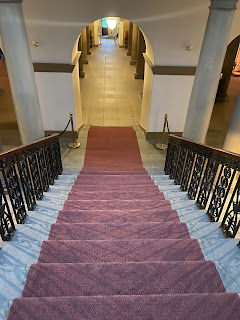 Imagine yourself sweeping down this staircase in a gorgeous ballgown 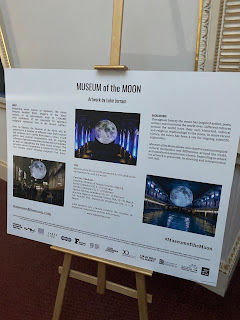 Some info about the moon 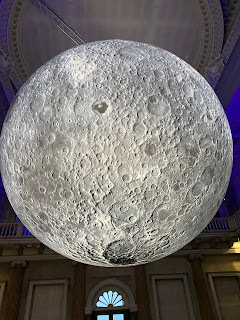 It is stunning in real life 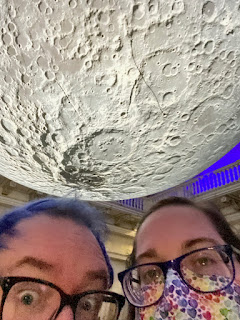 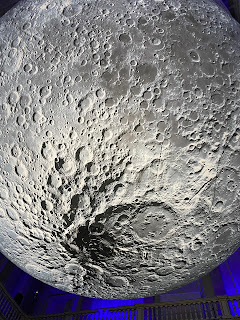 I was lying down here, this is as far under as I got 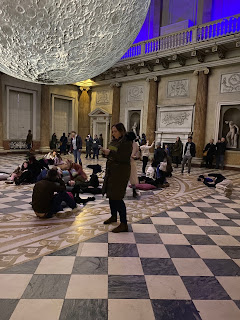 I took this to show the ballroom 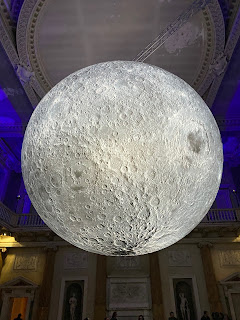 As we walked round, so we could see it from all angles 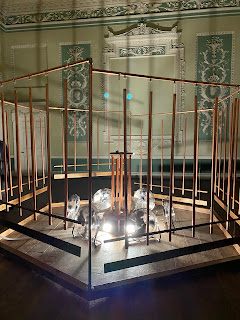 This was the wind chime kind of installation 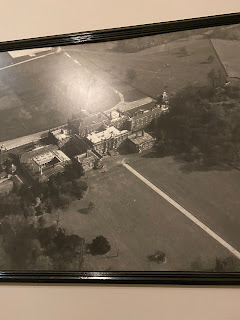 This is an old aerial photo of the house, apparently it has more than three hundred rooms but they aren't entirely sure how many it has... 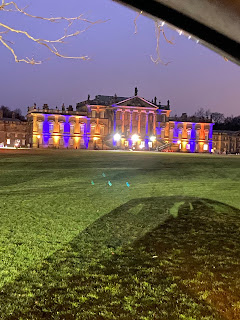 And finally the yellow and blue for Ukraine
Posted by Rebecca at Saturday, April 30, 2022