The day after my cousin's wedding Lee and I went to the Isle of Wight for a few days. As we were already in Southampton it made sense to just go on the ferry and have a few days away. We booked an Airbnb on a holiday park in Shanklin, and booked the ferry for around 4pm. We had breakfast with my mum and stepdad and then said goodbye to them.

We drove down the estuary from Southampton a bit just to look at the water a bit. We stopped and had an ice cream and just relaxed a bit. Then we went to Sainsburys to buy supplies for the week, and some petrol. We were early for the ferry so I decided to see if we could get an earlier one. We could! We paid £8.25 for the privilege which was fine, and we sat on the docks for a bit before loading on. On the ferry we had a drink and something to eat. It only takes about an hour so it wasn't long before we were driving through the Isle of Wight countryside to Shanklin.

Our caravan was nice and in a really quiet part of the park. It had everything we could need. The only problem was that the bedroom wasn't very quiet or restful - the curtains were really light which kept waking me up, and the flipping wood pigeons started cooing at a stupid hour of the morning too!

We had a quiet night, we made katsu curry and watched a film and just generally chilled out! 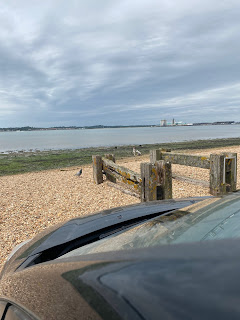 Looking across the water to Southampton 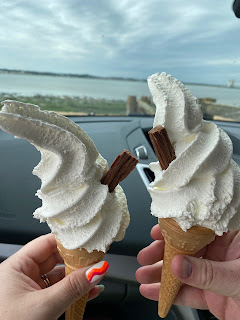 Eating ice creams in the car 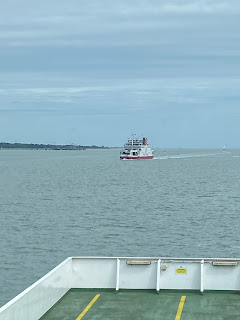 The ferry coming back to Southampton as we were crossing to Cowes!

I started my satnav when we were still on the ferry and it did indeed have me in the middle of the water, haha 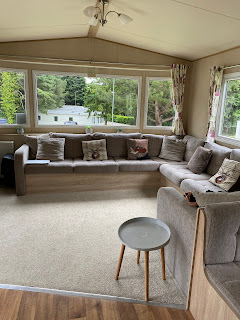 The living room of the caravan. I do like going in a static caravan for a holiday, they're very cute. We ended up moving the dining table to in front of the sofa which was more useful for us 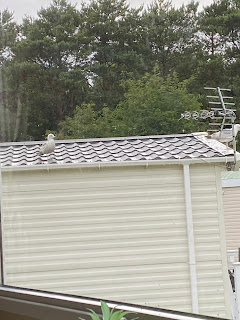 And here's some of the wood pigeons!
Posted by Rebecca at Friday, August 19, 2022