As I said, we had a huge corner bath in the cottage so I had planned ahead and went to the White Rose Centre a few weeks ago with my mum to buy some bath bombs. I don't go into Lush very often; I tend to stock up on Snow Fairy around Christmas and then never step in again. I also don't often buy bath bombs, so I let the very friendly staff member sell me a few. I love Lush staff members, they're always really friendly and enthusiastic, and they always know loads of stuff about the products.

I didn't take a picture of my entire haul, what kind of a blogger am I?! But here's a rundown of the ones we had.

First bath: Metamorphosis - this was a gorgeous bomb that started off dark grey. It made the bath water look filthy like I'd been wallowing in mud all day. It had yellow and pink in the middle and a layer of glitter. The smell is really nice - it's supposed to be black pepper and myrrh, it smells really warming and relaxing. I'd definitely buy this one again.

Second bath: Intergalactic - the water went a gorgeous blue colour and there is so much glitter in this bomb. I was covered in a thin layer of it and left it EVERYWHERE. It smelt of peppermint and citrus and felt really invigorating. I definitely want to use this one again. The glitter was so much fun in the bath!

Lee's bath: Rocket Science - Lee had his own bath on Tuesday afternoon, instead of just jumping in mine after me. He has really sensitive skin but the Lush stuff never seem to aggrevate him, which is good. I bought him Rocket Science, which is a smaller and therefore cheaper than the others. It still packed a punch though, Lee really enjoyed it. It is very lemony and turned the bath a gorgeous blue. Lee really liked it so I think I'll buy him a few for Christmas.

Third bath: Never Mind the Ballistics - This is a weird bomb! It's got a layer of moisturiser on top of one half, which melts and leaves the bath water really soft, making your body really soft. It did make the bath tub really slippery so be careful. It smells really orangey which I loved. I probably wouldn't buy this one again, though.

Fourth bath: Chin Up, Buttercup - I liked the smell of this but didn't think it was anything astounding. I also didn't like the bits of lavender coming off at the beginning and ended up scooping them all out. Within the bomb are little bits of moisturiser which melted eventually. I didn't really like them though. It's a shame because the lemon and lime scent is fabulous!

I also bought two Mmmelting Marshmallow Moments after the sales assistant said they smell the same as Snow Fairy (which is a sort of candy floss/bubblegum flavour if you don't know it). They're only tiny and you can put them to melt in the bath like a bomb, but Lee and I used them as soap. They've got one rough side which made them really exfoliating on my skin. I'd definitely buy these again! 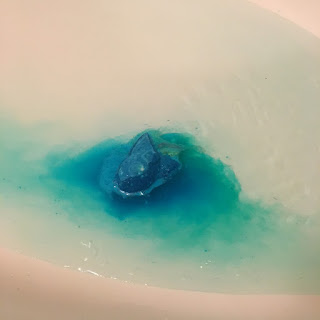 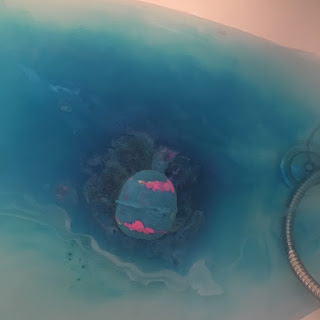 Intergalactic - this leaves a LOT of glitter! 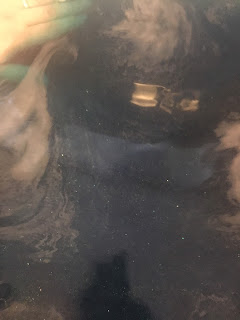 You can see some of the glitter here. Just gorgeous, I loved it 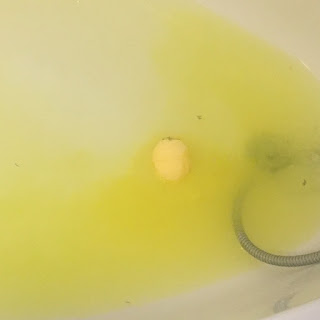 Chin Up Buttercup. The water was really quite yellow!
Posted by Rebecca at Thursday, November 16, 2017

Email ThisBlogThis!Share to TwitterShare to FacebookShare to Pinterest
Labels: lush