Meals out in October

In October half term I had a couple of nice meals out with two friends, so I thought I'd just write a quick post about each of them. I didn't mean for both meals to be in half term and actually it wasn't half term in Barnsley, but it was in Wakefield and Leeds where my friends live. Half term for Katie meant that she could ask her mum to have her kids overnight as her husband was away, so it worked out well for us!

I met Katie at university; we were put in the same house in first year but it turned out we were both from Wakefield and we were both studying Theology. She ended up being one of my bridesmaids and although we don't see each other all that often it's always really good when we do. She's really funny but she's also been around for a lot of my life now, and vice versa, so we know a lot about each other. We ended up talking about my dad's death nearly ten years ago, about families, about all kinds of things. 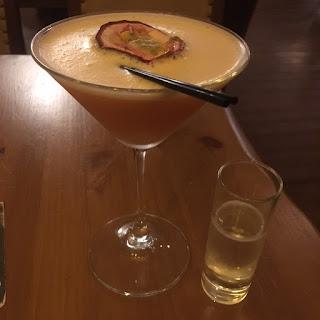 Katie and I had a great time, we'll definitely have to plan something else soon.

Then on the Thursday of that week I went out with my friend Chloe. I met her online originally, but she only lives in Leeds. We had arranged to go to Pot House Hamlet near my house, although when we realised it was half term in some parts of Yorkshire we were worried it would be full of kids. We decided to go and see, and said we'd otherwise go to a pub, but when we got there although it was busy it wasn't full, and there were only a couple of tables with kids. It's a strange place because it seems like it will just be an ordinary cafe but it's actually really fancy food. I really like it there - we even went there on my birthday earlier in the year. It's definitely worth a visit if you're in the area and there are some shops and things on site to browse around too.

We sat chatting for ages and had a really lovely time. I feel like it's ages since I saw Chloe but she's one of those people where it always feels like we saw each other just yesterday.

These pretty decorations hang from the ceiling: 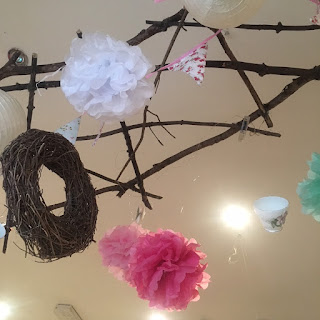 And this was the really yummy chocolate cake I had with coffee for pudding! 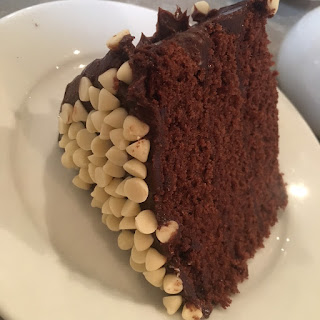