Towards the end of May I went to Manchester to see my friend Amy and her new baby. I had met baby Daisy at the vow renewal, but didn't have much of a chance to cuddle her and see how Amy was doing. I offered to go over and Amy (who is vegan) gave me a whole range of restaurants to choose from. I said that the Caribbean place sounded right up my street so we set off in Amy's car. It is called The Drop and it's on Barlow Moor Road in Chorlton.

It was a sunny day so we could have sat outside but we chose to go inside. We were the only ones inside! I loved the decor, it was so colourful and pretty.

The menu has a bunch of lovely choices, including lots of veggie and a few vegan options. I was tempted by quite a few things, but Amy had mentioned the jerk halloumi so I went for that in a "lunch box" which meant it came with rice, coleslaw and a dumpling. Amy had dumplings and coleslaw and something else which I forget. It was really delicious food and really filling! Oh, and cheap too!

On the way back to Amy's we popped into the Tea Hive to buy cake. I couldn't stay much longer because I had to get home for 5pm, but I enjoyed my brownie later. It was a nice trip out! 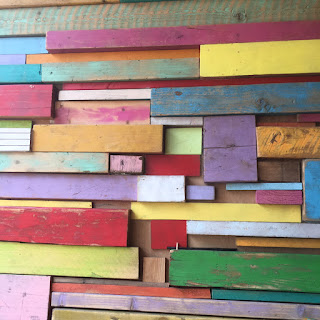 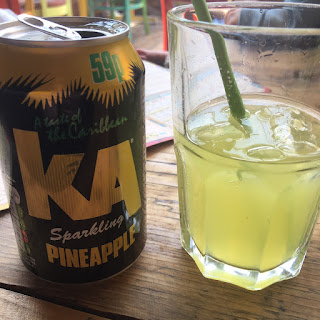 Fizzy pineapple juice - I wrote a whole zine about fizzy pop, I love this stuff especially 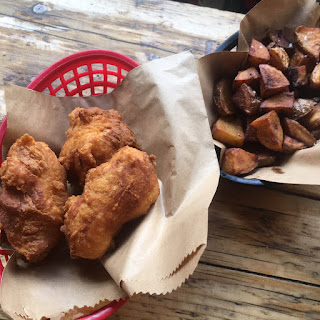 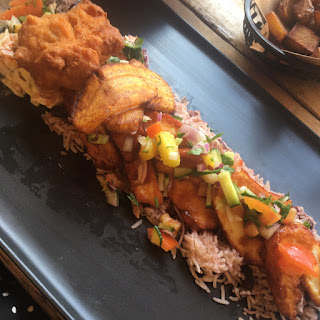 My jerk halloumi on a bed of rice with mango salsa, coleslaw, and a dumpling 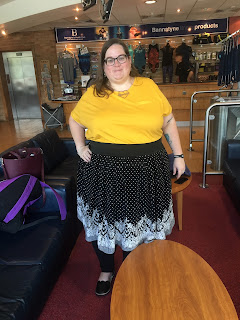 Here's what I wore - I wore the skirt that I made by chopping the top off a Scarlett & Jo dress, and my new mustard coloured top with it 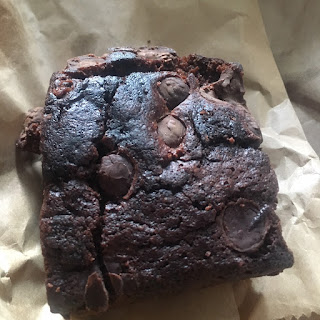