What I Wore 8th June

At the beginning of June I had a resurgence of one of my chronic illnesses, meaning I was almost incapable of doing anything. I struggled through work on the Tuesday, but Wednesday, Thursday and Friday were a total washout. I had said I was going to go to the cinema on Thursday, but couldn't manage it. I'm extremely lucky to have Lee to look after me, I know that. I also made sure to take all the medication I could and to let myself sleep - a couple of times I fell asleep on the sofa and I must have needed it.

By Saturday I was feeling a bit better so I wanted to get out for a bit. I'm a homebird but so long in the house was beginning to drive me mad. Lee was playing a gig with his band This Is Not A Drill in Sheffield, so I said I would go with him. It was in a pub in Pitsmoor where the ordinary customers seemed pretty bemused by the ton of punks turning up. Lee and I sat down for a bit then moved towards the stage when it was time for him to play. His band was good, just very loud - they play hardcore punk.

We spoke to a few friends and then stayed to watch Rites of Hadda who I actually really liked. They sounded a bit like the Dead Kennedys. We had some vegan burgers from the barbecue out back. It was a nice evening and I was really glad to get out of the house!

I'd put on my flamingo skirt with this new top from Simply Be that I got a few weeks ago. I haven't worn it yet but I liked the knotted bit on the front and the colour. It feels really comfortable to wear and I think it looks quite cool too! 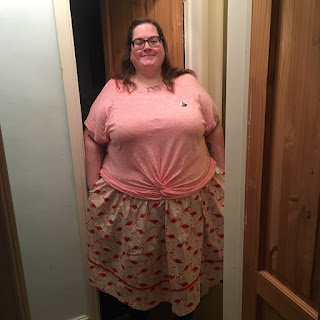 Email ThisBlogThis!Share to TwitterShare to FacebookShare to Pinterest
Labels: lindy bop, simply be