A New Crochet Blanket For Me

I recently finished a crochet blanket that is for me! I wanted to make another of the blankets I made for Lee for Christmas 2017, which is called A Spicier Life. I enjoyed it so much the first time around that I wanted to make one for me. I actually bought all the yarn for this back in last autumn. I chose them based on a photo of wildflowers, although I'm not sure that translates into the blanket itself! I do love the colours though. I gave each colour a letter and followed the pattern; I didn't know what colour combinations would come up but I liked that random aspect to it. I don't think there were any colour combinations that I really disliked.

I started this blanket last October and made just over a third of it. Then for some reason I just put it down and didn't pick it up again. I was cross stitching quite a lot over the winter, then I made a blanket for my friend Amy, then I was doing something else again. However, at the beginning of June I picked it up again, determined to get it finished. It was extremely ridiculous to pick it up just as the heatwave started, because having a heavy blanket over you isn't ideal! But I did crochet when we went camping which was nice, and at home I rested it on my desk when it was hot.

I made a mistake about halfway through, and didn't realise until I had done thirteen more rows. That was one Monday at my craft club, and when I realise I sulked about it all week. I knew I had to pull the stitches out - I had managed to drop around 23, and the blanket veered in awfully - but I really didn't want to. Eventually on Friday I made Lee pull out the rows and I started again. It was fine in the end, but annoying!

I absolutely love it, it's so colourful and bright, and I can't wait to use it over the winter and for camping! 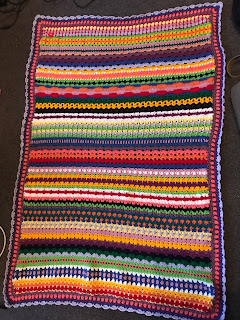 It's about five feet long and three feet wide, and made up of at least twenty thousand stitches 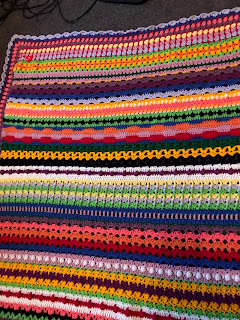 There are some lovely colour combos here 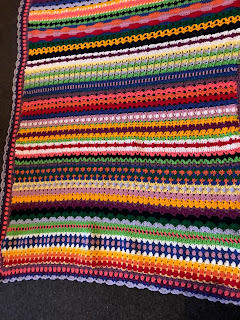 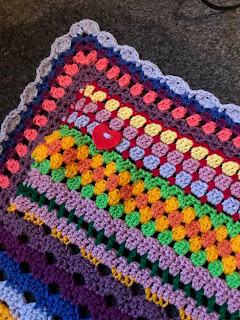 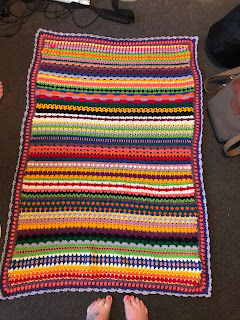