Saturday 6th of July was Birmingham Zine Fest held at the Impact Hub in the city centre. I've never been before, but I'd seen the call for table applications on Twitter so I applied. Birmingham is under two hours' drive away from us so I knew we could go there and back in a day. I got a table and had some really lovely emails from the team. I also booked myself on to the embroidery workshop that was happening over lunchtime.

We set off at around 8.15 and got there in plenty of time before it opened at 10.30, giving us time to get the table set up. The first hour and a half were really quiet - and that's fine, that's how it goes sometimes - but then it picked up and we ended up selling a lot of zines. I only knew one other zinester that was there, so it was nice to meet some new people and buy new zines.

I really enjoyed the embroidery workshop. A nice person called Reena was leading it and she encouraged us to do pieces of our favourite snacks, so I started this bit with some sushi on it! I didn't get very far as you can see but I have a ton of threads at home so I know I can finish it. I don't do a lot of embroidery - I prefer cross stitch and crochet, as you know - but I do like going a bit freeform like this at times. There was a potluck lunch to share which included the most delicious, homemade, samosas that I've ever tasted.

We packed up around five and then we were going to go to Cafe Soya, which I went to in 2013, and which serves veggie and vegan Vietnamese food (they do meat too, but they have a lot of fake meat which I wanted to try). We drove past where it used to be, but it's moved into the Chinatown area, which I've also been to before. Lee dropped me off and went to park. I found it, but it's a really small cafe now, and I wanted something a bit posher with table service.

So we walked through to Ten Ichi, a Japanese restaurant, which I have been to and remembered being good. We were sitting right near the open door which was bliss because we were both warm from the zine fest. I ordered plum wine which I've not tasted before. It came with ice and was really delicious - I'll have to buy some.

I went for a bento box with tempura vegetables and vegetable gyoza. It was really nice, simple but yum. Lee had chicken ramen and he loved it - it was a huge bowl. Oh mine also had a bowl of miso soup to start off with which was nice.

After we'd eaten we set off home, we'd had a lovely day but were both very tired!

I wore my purple dotted Scarlett & Jo dress and a black shrug because it was hot. 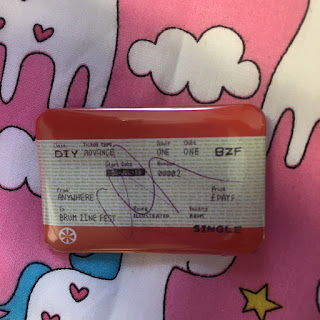 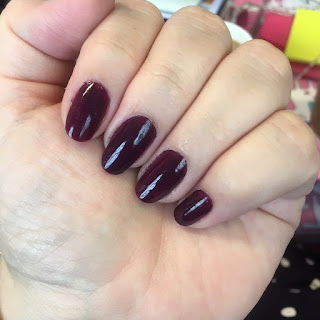 My nails were Urban-Night by China Glaze, it could have used four coats but I don't have time in my life for that nonsense 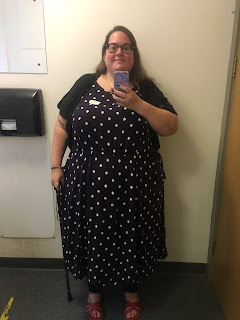 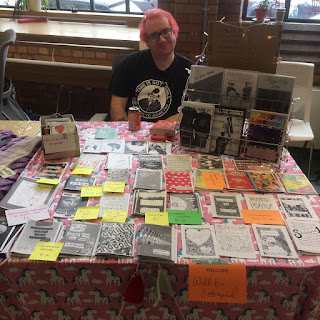 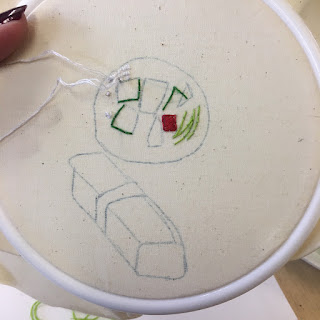 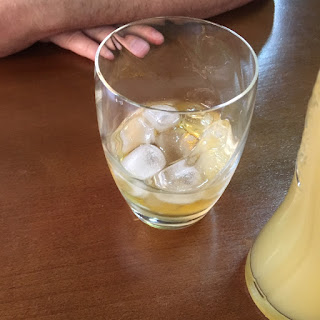 Plum wine - I was surprised it wasn't darker in colour? 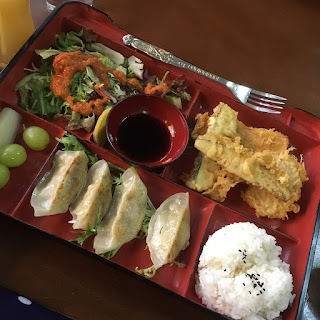 And finally my bento box - delish!
Posted by Rebecca at Thursday, August 15, 2019