At the beginning of March I had tickets to see Jesse Malin with Sam in Leeds. It was at Headrow House which I don't mind as a venue, but parking close to it is terrible and I was getting stressed about it, so Lee said he would take me and we should have something to eat first. I said Turtle Bay because it's one of my favourites and he hasn't been that often. We got seated quickly as it was early, and had a really enthusiastic and nice waitress.

The menu has changed since last time I was in Turtle Bay and they now have a set menu of two courses for £12 and three courses for £15, as well as their tapas dishes and some new ordinary dishes. Lee and I couldn't exactly work out which dishes were on the set menu, though, so didn't end up going for that.

The happy hour two for one cocktails were still happening, so I ordered two Electric Boogies which were blue and delicious, I was happy with them.

I went for sweetcorn fritters to start with, which I really like and get often. I got four on the plate which was a lot, and I'm sure they used to come with some kind of chutney and now they don't, so I found four of them a little bit dry. Lee had chicken curry flatbreads and said they were nice.

There's a new vegan burger on the menu called Vegan Motherclucker, it's a "chicken" patty with a spicy coating and came in a bun with smashed avocado, vegan mayo, tomato, pickled onion, and lettuce. I ordered that with dirty fries, which are fries with curry sauce and cheese on them. They're vegetarian not vegan. Lee went for jerk chicken with fries, he was happy with it and there did seem to be loads of chicken on the plate.

I really liked the burger. The "chicken" patty was really yummy and spicy and the smashed avocado tasted really good on top. The fries were okay; the curry sauce was a bit over the top for me. I wouldn't order them again, but I'm glad I tried them. It's nice that they keep refreshing the menu and I'll keep trying new dishes!

The gig was fine, I enjoyed it and generally had a nice night out. 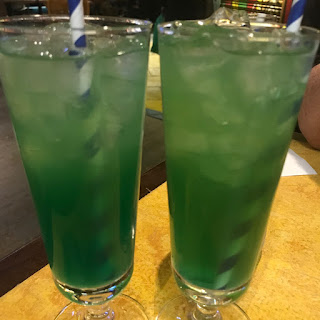 Two for one cocktails, all for me 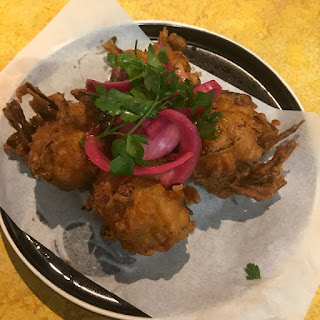 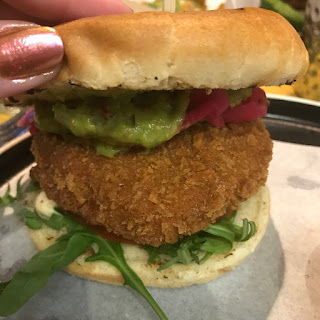 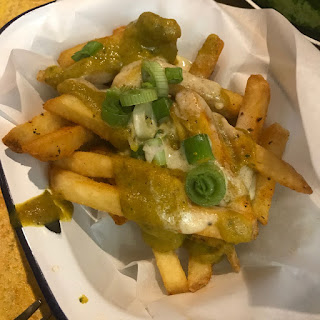