Festive Lunch Out with Lee

At the beginning of December Lee and I had the last quiet weekend before Christmas. I knew this would happen, so I was ready for it, but I also wanted it to be a nice weekend for us before all the craziness kicked in. On the Saturday morning we had to go out to pick something up from the sorting office (never fun but especially not so close to Christmas), go to the post office, and go to the supermarket. But Lee had suggested we go out for lunch, and I agreed.
We went out quite early and did all the errands, and then headed to The Sovereign in Shepley for around 12.30. We hadn't booked but they managed to squeeze us in. The pub is very olde-worlde anyway, and it looked lovely all decorated for Christmas. It's part of a chain but that way I know they will have decent vegetarian choices, and they do change the menu fairly often. I looked at the festive menu but decided against it.
The squashage and mushroom roll on the starter menu sounded nice, so I had that with some chips and some onion rings. It was so nice - really savoury-tasting and full of mushroom. I'm glad I had it! Lee had a chicken, lee, and mushroom pie with mash and vegetables. He mostly eats vegetarian with me, but he does eat a lot of tuna and usually when we go out he eats chicken. I'm proud of all the vegetarian stuff he's tried in the last three years, but I honestly don't care whether he eats meat or not.
For pudding I had double chocolate brownie with Baileys ice cream, which was lovely. Lee also had brownie, but in the mini pudding with a hot chocolate. He liked it!
When we got home we put the Christmas tree up while watching Home Alone. The kittens were very excited to get to go into the cellar, where they aren't usually allowed. They were also very excited by all the baubles. They played with the tree a bit last year, but I don't think they remember it too much. We'll see how it goes with them! It was throwing it down outside but lovely and cosy in the house while watching a film. 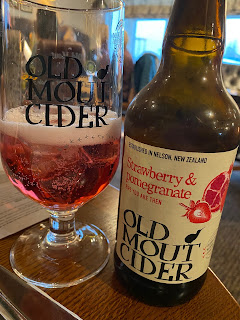 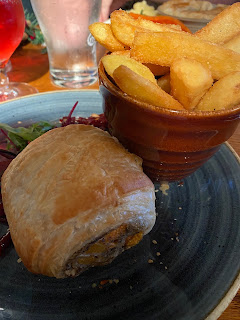 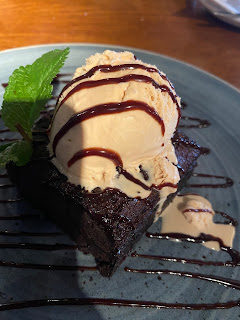 Brownie - it was so sticky and delicious 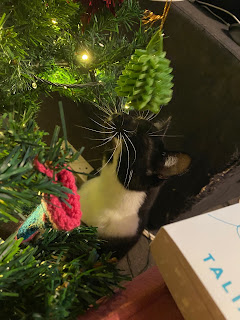 And here's Poppy swearing that she was just LOOKING at the tree
Posted by Rebecca at Saturday, February 05, 2022

Email ThisBlogThis!Share to TwitterShare to FacebookShare to Pinterest
Labels: lunch